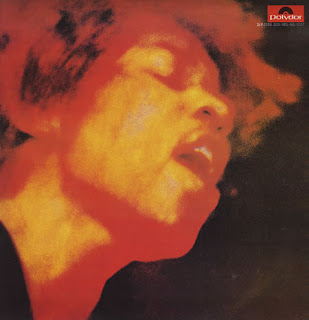 I have heard many heavy albums over the years but when it comes down to weight, the 2010 vinyl reissue of Electric Ladyland by the Jimi Hendrix Experience is the heaviest in my collection. Both discs are 180 grams, the gatefold sleeve is heavy duty cardboard and the 10"x10" booklet inside puts it over the top. America Eats Its Young, Uncle Meat and Agharta all came close but the scale always tipped in Jimi's favor. I have a bunch of other vinyl box sets but they're mainly compilations so it's not really a fair comparison. Also, when it comes down to heaviness, Jimi's pretty fuckin heavy and Electric Ladyland is an incredible album.

Electric Ladyland was released in October, 1968, almost a full year since it's predecessor Axis: Bold As Love. Back then it was customary for artists to release two albums a year. A 12 month wait must have seemed like an eternity for fans back then, not to mention causing the record company to get uptight. Prior to 68 there hadn't been many double albums of original music by rock bands, only Bob Dylan's Blonde On Blonde and the Mothers Of Invention's debut Freak Out (both 1966). The Beatles would release their double "White Album" about a month after Electric Ladyland. Double albums catered to a baked audience who were tired of records with a few hit singles and a bunch of filler songs. The gatefold sleeve also proved to be a perfect surface to clean the seedy weed they were buying.

I know I was pretty freaked out the first time I heard side one of Electric Ladyland when I was about 10 years old and didn't even know what pot was. I can only imagine what it was like for people first hearing this stuff under the influence in 1968. The tripped out, slowed down voices and guitar feedback of "…And The Gods Made Love" is still pretty freaky. "Have You Ever Been (To Electric Ladyland)" is a short, 2 minute tribute to Curtis Mayfield, one of Jimi's biggest influences. This must have been very confusing for people expecting songs like "Purple Haze" and "Foxy Lady" but if they made it past those two songs, they were rewarded with "Crosstown Traffic," one of the singles released from the album. Following up a great pop/rock song like that with a 15 blues jam is something only Jimi could get away with. "Voodoo Child" has some of Jimi's best blues playing and has killer support from Jack Cassady (Jefferson Airplane) on bass and Steve Winwood (Traffic) on organ alongside Mitch Mitchell's great drumming. It's too bad this line up didn't get to record more together.

Side two starts off with bassist Noel Redding taking over lead vocals on "Little Miss Strange." This song often gets dismissed for being lightweight, but it's still a pretty cool and has a great guitar solo. The majority of side two shows Hendrix exploring his R&B roots more than he had on his previous albums. "Long Hot Summer Night" (with Al Kooper on piano) once again shows the influence of Curtis Mayfield and "Come On (Part 1)" is a smoking cover of Earl King's New Orleans R&B classic. "Gypsy Eyes" is a greasy mutha with Jimi's guitar being panned between the left and right speaker. According to legend, they did over 30 takes of this song causing Jimi's producer Chas Chandler to walk out leaving Jimi to produce the rest of the album. Side two wraps up with the incredible "Burning Of The Midnight Lamp," which had been released as a single in August, 1967.

The end of side two sets up the start of side three perfectly. If you're feeling lazy "Rainy Day, Dream Away" will not motivate you to do anything except wake and bake. Any morning where it rains I fantasize about throwing on side three of Electric Ladyland and sitting around in my undies all day. Unfortunately, I have too many responsibilities to make that happen any time soon but it is a goal I'm confident I will achieve one day. Jimi plays great on this jam with special guests Buddy Miles on drums, Mike Finnigan's organ, Freddie Smith's tenor sax and Larry Faucette on congas. "Rainy Day…" dissolves into the psychedelic masterpiece "1983…(A Merman I Should Turn To Be)," 13 minutes of pure sonic bliss. There's all kinds of crazy panning, backwards cymbals, phasing effects and even a funky bass solo from Jimi. That song connects to the one minute coda "Moon, Turn The Tides…Gently Gently Away."

Side three is dreamy sounding, but side four wakes you up with "Still Raining, Still Dreaming," an uptempo jam from the same guys that played on "Rainy Day, Dream Away." Things get real serious for the remainder of the side. "House Burning Down" is a dramatic song that captures the feeling of unrest going on in the late 60's. I've never heard Bob Dylan's original version of "All Along The Watchtower." There really doesn't seem to be any point. Dylan changed the way he plays that song live to match Jimi's arrangement of it. The album wraps up with Jimi's calling card "Voodoo Child (Slight Return)," one of the most monstrous guitar jams of all time. Talk about heavy!


Electric Ladyland is definitely a product of its time but still sounds incredible 45 years later. No matter how you listen to this album, it works so well. The vinyl sequencing is great, but you can also listen to it on CD from start to finish without getting bored. You can also put it on shuffle on your iPod to come up with all sorts of cool, random sequences. Hendrix is often associated with the British rock scene, but this is such  a New York album. Recorded primarily at the Record Plant in New York City with ace engineer Eddie Kramer, Jimi really outdid himself on this one. Growing up in the suburbs of New York City, the studio that Jimi eventually built on 8th Street in the West Village was always a destination I would pay tribute to. It wasn't hard to miss its round, brick wall which is now, sadly, gone. Whoever decided to change the front of the building was definitely not experienced.