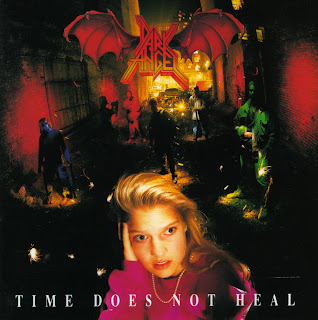 As a term used to describe music, "heavy" suggests to me analogies to horror movie monsters; in this, there are two axes: power, and precision.

The maximum power might be something like Godzilla, King Kong, or Cloverfield's LSA.... (i.e., a giant monster-- crude, obvious, but massively destructive).

The maximum precision, then, would be something like the various Terminators (Arnold, Robert Patrick or that one chick)-- very hard to beat, very organized and intelligent, but smaller-scale.
So moving that analogy to music (and metal), is the heaviest album loud, bombastic, and destructive-- or precise and devastating?

And is there an ideal combination of the two? The musical equivalent of a 200-foot terminator? Or even one that can change its size at will like Apache Chief?

Let's get all Eh-neeek-chock up in this bitch and sort shit out.

Ahem. You may know open your prayer guides to page 69. Though this review has nothing to do with Ministry. I just thought I sounded vaguely priestly for a second and I ran with it, speaking writerly.

My second thesis  --more of a sub-thesis, really-- regarding this most (un)holy and (un)righteous of metal questions, is: regardless of whether it was powerful, precise, or some combo of the two, what album, what 8-track, what cassette/CD/illegal digital download, even what concert, slapped you in the dick/vag the hardest?

What had the most impact on you at the time? Even if that impact has been soured by habituation and the gradual numbing of senses that both Rimbaud and Lady MacBeth talked about all the Goddamned time?

What album rocked your world, fucked your face off, blasted your ass, tickled you pink... no, tickled you arterial-spray red, busted your nut, shredded your denim jacket (with or without patches, though if "with," were they also shredded?), slapped your "little Johnny" behind the ear, yodeled in your canyon, shifted your paradigm, helio-centricized your mediaeval world, emptied your Bastille (vived your La France), exterminated your Jews then killed itself, Tommy Lee-ed your Pamela Anderson, tortured and slaughtered your Only Begotten Son, or just made an entirely distinct and perhaps noteworthy impression on your soul-- via your ears?

In 1991 LA’s Dark Angel released their fourth and last album, Time Does Not Heal. That is my baby here. I was already a huge --like only teenagers can be really-- Dark Angel fan at the time. I had gotten Darkness Descends (their second album) on a mix tape from some kid in my biology class, waited in line at the record store for Leave Scars (third album), and seen DA in concert with Death (very coolly my brother's favorite band at the time; that was a good show).

Time Does Not Heal could've been shit and I would've loved it; DA were fast and ferocious as fuck and I loved, and love, that. (Though they're not particularly Satanic --as their name and song titles up to 1991 might imply-- just menacing/ unsettling.) The new dimension they added to TDNH (and added well) was precision.

And fucking hell, did they add that.

TDNH is crushingly heavy while also being fast (strangely difficult to do perfectly); industrially-precise while sounding like it was being played by humans and not machines, and it was fiercely literate, smart as hell: speaking as a therapist, drummer Gene Hoglan, who wrote all the lyrics and riffs, had some genuinely great insights into many aspects of psychopathology that hold up even after my years of mostly-useless-but-looks-good-on-a-resume education.

Sidenote: Gene Hoglan? Goddamn. Man never studied psychology, guitar, or even drums (where he's known as the "atomic clock" for good reason), and he just knocked it out of the park on all aspects of this record.

Unfortunately, for some fucking reason, TDMH is not available digitally anywhere I could find-- and freaking Terry Date produced the thing! You can tell, it sounds awesome--the perfect blend of clever mixing with sheer power, as was most of his work at that time: just look at Overkill's The Years of Decay or Pantera's Cowboys From Hell or Vulgar Display of Power....

Anyway, take a gander down below:

Anonymous said…
I have always heard great things about Dark Angel but never have really been sure what to check out by them, other than Darkness Descends. I am going go get my hands on this album though! Thank you!
December 2, 2013 at 10:47 AM