The Heaviest Album I've Ever Heard - Metallica - Master of Puppets 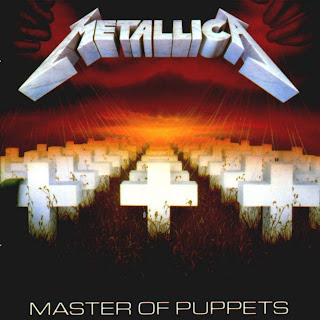 Once, the question was posed, “what’s the heaviest album you’ve ever heard?”

Sounds pretty simple, but the complexity of it is enough to make you challenge the very foundations of your assumptions about life, self and weight.  For example, just what the hell is ‘heavy’ anyway?  I found angles jutting through my mind in every direction, my head … a-splode!.  Doors of perception shattered in a cascade of strange dimensions.  Just what is heaviness?

For sheer brutality and abrasiveness Pantera’s ‘Great Southern Trendkill’ is a relentlessly heavy album.  Any one of the first six Black Sabbath albums (henceforth known only as ‘The Six’) are heavy, not only in tone but in atmosphere and subject matter and could easily be considered the heaviest of all time.  For pure downtuned low end heaviness, perhaps the purest form of measurement, Electric Wizard’s ‘Dopethrone’ may be the heaviest ever.

But no, the title must go to … Metallica’s ‘Master of Puppets’.

The first time I heard it I was either four or five years old.  I remember it well.  I used to hang out in my teenage uncles’ rec room downstairs at my Oma and Opa’s place.  My cousin and I would run around in berserker fury to a steady soundtrack between stolen sips of unattended beer.  AC-DC, Iron Maiden, Judas Priest were the carnival barkers of our toddling freakshow.  I distinctly remember, literally banging our heads against the wall and attempting to wake the dead to Quiet Riot.  Megadeth was thrashy and grimy in its stylings and ZZ Top just bled cool, but there was one album that blew away all the rest.  A forbidden secret, heavier and somehow darker than all that had come before: ‘Master of Puppets’.  The effect it had on my young mind was like Ritalin.  It was so far over the top with exuberance that it went beyond inspiring me to hyperactivity to the point of collapsing internally, just sitting there, hopeless, mindnumb and agape.
Fast forward a moment and there was this one guy in my hometown you’d see out around late at night.  Not walking so much as propelling himself forward by a full body headbang.  Of course he’d have his headphones on (I’ll never know how they stayed attached to his head) so you couldn’t ever talk to him.  I doubt he’d even register your existence even if you approached him, that’s how focused he was on what he was doing.  But in a way you didn’t want to interrupt him as he mouthed the words and splattered air guitar all over the place.  It was enough to simply observe his awesomeness and to respect it.  Anyway, you’d see him out and about during the day on rare occasions but when you did he would appear sleepy eyed, hopeless, mindnumb and agape.  This is what we call a ‘metal burnout case’.  I never knew what exactly he had listened to to get to that point but I recognized and understood the expressionless look on his face instantly.  After all, “I’ve been there, man!”

But how did I get there?  What makes ‘Master of Puppets’ so heavy?

It’s not the sheer titanic energy of “Battery”, but that’s a start.  It is an album of dark tones, but these are not black.  The tones are red and deep orange, angry, aggressive colors to scribble on the walls when needing release.  With brief exceptions during the title track and “Welcome Home (Sanitarium)” this album wraps coarse hands around your neck and throttles you like a rag doll.  These two tracks offer another layer of heaviness despite the relative calm of the music and that has to do with subject matter.  Addiction and institutionalization, both of which were real dangers for many of the metal heads I knew who walked a razor’s edge of drink and drug abuse in a society that just didn’t understand their iconoclasm.  These were heavy subjects indeed.

But as time moves on I’m convinced that the heaviest song on the album is “The Thing That Should Not Be”.  Its themes and subject matter were taken right out of horror author H.P. Lovecraft’s nautically-themed fiction.  As a matter of fact, this song as well as the instrumental “The Call of Ktulu” from Metallica’s previous album ‘Ride the Lightning’ served as my introduction to the master of horror.  No author is heavier than Lovecraft and Metallica was taking the words right out of his mouth long before it became a heavy metal staple to do so.  You might say that this song introduced Lovecraft inspired lyrics as a heavy metal trope.  Now that’s heavy.  And you know something else?  There ain’t nobody I know that doesn’t like the eight minute instrumental “Orion”.

Heaviness becomes an addiction.  Just ask Mr. Headbanger.  Once a certain weight has been established in the ears, there’s no going back to lighter fare.  It’s almost as if the body itself adjusts to the pressure of heavy music and may die if emerging too quickly while having to listen to, say, the pop music station at work.  It sure feels that way to me.  But there was one other guy in high school who it seemed went too far.  He was a guy who hit his head and it changed his personality completely, like Fred Flintsone.  By the time I knew him he wore his hair in a red dyed spikey Mohawk and painted mascara lightning bolts from his eyes.  I tried to get him to listen to ‘Master of Puppets’ one day in class but he shook it off, claiming Slayer as his benchmark.  Nothing less than Slayer, it seemed would ‘get him off’.  I wonder now what the heaviest album he’d ever heard was.  Is Slayer heavier than early Metallica?  I don’t know.  They’re certainly more abrasive but the tone on ‘Master of Puppets’ was certainly heavier and besides, Tom Araya may be ‘the man’, but Cliff Burton was THE MAN.  No bassist was ever heavier than Cliff and he did it without much rumble, just heavy distortion, a mass of hair in the face and wildly thrashing fingers (RIP Cliff).  This album was the ultimate combination of tone, subject matter, mood and most importantly good riffs and good tunes and it has proved to be endlessly inspiring.

Whenever we’d be jamming and the ideas would start to dry up or the energy would start to flag, a distinctive DRN!! would slash through the silence like a swashbuckling strike.  I would peek over my cymbals at my guitarist who would be giving me an intense stare.  DRN-DRN-DRNNNNNN!!! his only response to my silent inquiry.  We’d get back on the horse with “Master of Puppets” alright and start to jam again, every single time.

Posted by The Ripple Effect at 1:51 PM