The Folks Behind the Music - Spotlight on Woody- The Ripple Effect, The Obelisk and Mighty High 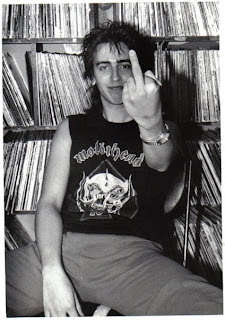 Today's spotlight on another of Ripple's own, Woody, a multi-talented and music brainiac who also shares his knowledge with columns at the Obelisk and his stoner punk misfits, Mighty High

I was inspired by Bob Muldowney's writing in his awesome metal fanzine KICK*ASS during the early to mid-1980's. He really wrote from the heart and had a great sense of humor. That motivated me to write a few things for my high school newspaper, including an interview with Reed from C.O.C. right before Animosity came out. Bob Muldowney was nice enough to print a review I wrote of a Black Flag/Saint Vitus show I saw at Irving Plaza. Getting my name is KICK*ASS is something I'm still very proud of. For about a year I did album reviews for the college paper. They would always try to get me to review something the other students had heard of. I really didn't think there was any point in writing about The Outfield or Mr. Mister when they were getting played on the radio every five minutes. When I was working for Caroline Records in the early 1990's, they did an in-house fanzine called Swill. They'd send it out to record stores to give away. I had some fun interviewing Killdozer, Laughing Hyenas and Wayne Kramer for that. I didn't do any music writing for many years until I discovered the Ripple Effect while promoting the first album by my band Mighty High. I was impressed that they had reviews of so many different types of  music. They asked me to write about my favorite live album (Grand Funk's Live Album, of course) and here we are 6 years later. That led to me also doing some writing for The Obelisk site and the NJ weekly paper The Aquarian.

I have three older brothers. Two of them were heavily into music and the other one, to this day, is pretty indifferent to it. We totally ruined it for him. I was exposed to a lot of stuff at a very young age. By the time I was 7 or 8 years old I was buying records. Frank Zappa, Ted Nugent and Alice Cooper were my favorites. My eldest brother Joe was heavily into soul music. We'd watch Soul Train every Saturday morning and listen to his James Brown, Chuck Berry, Isaac Hayes and Booker T & The MG's albums. I still listen to all of that music regularly. The first LP I ever bought with my own money was Bongo Fury by Frank Zappa and Captain Beefheart in 1975. It really flipped my lid. My first musical epiphany had to have been when I heard Alfred E. Neuman's incredible song "It's A Gas." It was on a cardboard 7" single that came with an issue of Mad Magazine. Lux Interior of The Cramps once said it was his favorite song of all time. I'm inclined to agree with him. The first album that ever terrified me was definitely Alice Cooper's Welcome To My Nightmare. Listening to it on headphones freaked me out, especially side 2 with creepy songs like "Years Ago" and "Steven."

Probably At Her Majesty's Pleasure by Gentleman's Pistols. Man, I love that album! Holy Shit by Superchrist, too, and the last few by the Italian band Ufomammut. 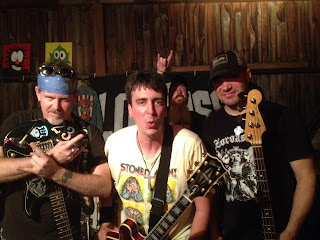 There's a lot of great, new-ish classic rock inspired bands like Gentleman's Pistols, Mothership, Gypsyhawk, etc and lots of good metal bands, too. It's unfortunate that more old dudes like me don't go out to see bands anymore. It's easier to stay home and watch sports, I guess, but not as much fun. Bands don't sell records like they used to so they have to tour so much. They burn out  a lot faster and burn out the audiences by playing too often. The biggest problem, really, is that there are too many bands all doing the same thing. That's always been a problem but it's even bigger now.

With so many music sites, how would you describe what you do?  What's your unique take on the music and writing?

I only write about what I love. Hardly anyone gets paid for writing music reviews anymore. I do it purely for the love of music and wanting to connect with the other freaks out there like me.

Illegal free downloads on your site.  Yes or no, and why?

I think it really depends on if the record is out of print or not. There are so many places to hear stuff for free online now it's not really necessary to have downloads.

I'd have to say Motorhead. I read an article about them in Creem and knew I'd never hear something like that on the radio. It was pretty hard tracking down a copy of Ace Of Spades even in the suburbs of New York City back then. Once I got it, I played it for everyone. Most people thought it was horrible but those that did like it are still my friends to this day.

All the bands I mentioned already. And everyone needs a copy of Screamin' by Jack McDuff. Smokes! 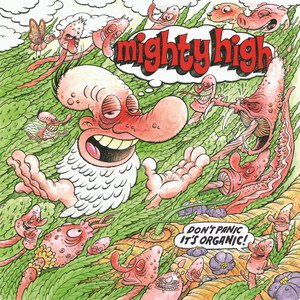 I have around 1000 LP's and probably double that on CD. I'm not super snobby when it comes to format. The music is the most important thing for me. All my albums are prized possessions but a few stand out - a copy of Black Sabbath's Volume 4 signed by Ozzy; Isaac Hayes - Live At The Sahara Tahoe signed by Isaac and his drummer Willie Hall; End Of The Century autographed by all four Ramones, etc.

What makes it all worthwhile for you?
When denim and leather brings us all together to set the spirit free, of course!

I might have a few extra hours a week but it wouldn't be as interesting.

Not yet. Like I said, I only write about what I'm into. I'm sure there are people on the internet that think I'm an idiot but that's OK.

I wish I had more time to write. If anyone remembers anything I've written, that's their problem.

I am a full time parent, part time student and play guitar/sing in Mighty High. I was a more prolific music writer when I had a full time office job. I was able to listen to a lot of new stuff all day and could usually crank out at least one review a week during a lunch break. It's way more difficult to find the time to listen to new stuff at home because it has to compete with a wall of classic albums for stereo time. I'm sure I will be back in full time office hell soon enough and will need the distraction of new jams.

I have to finish this interview, then go to class. I also have a batch of new Mighty High songs that need to be finished. There's a writing project that I've been wanting to tackle for years that would require a lot of research. I'd like to get down to the real nitty gritty of exploring the very first rock n roll records of 1954 and 55, putting them into a timeline of when they were recorded and released. I think a lot of people would be surprised at the sequence of events.

My family, food, beer, triple Marshall stacks. That's about it.

Posted by The Ripple Effect at 4:00 AM