The Folks Behind the Music - Spotlight on the Lauren Hutchinson. TheRock Fairy - TBFM and Manchester Rocks

Today's spotlight is on the wonderful world of the Rock Fairy, writer by day at TBFM online and also creator of her own management company, The Rock Fairy.

I kept a diary from a young age so I’ve always enjoyed writing but my first foray into writing about music came at school.  I think I was around 14 when we had to write an essay about a song for an exam in Music.  I picked Hotel California by The Eagles because I was fascinated by the imagery that song created.  I always remember being gutted about running out of paper in the exam and not quite finishing it.  Around the same time, I watched a film called Almost Famous about a kid who ends up writing for Rolling Stone just as he’s discovering music and it really struck a chord.  I didn’t for one second think I’d actually end up doing it though!

As for how I actually ended up doing it, well the landlady of my local music venue asked if anyone fancied writing a gig review for Manchester Rocks, a webzine here in Manchester.  I did a review of a Rolling Stones tribute and never heard anything back so I assumed it was rubbish and left it.  I saw a post on Facebook a month or two later asking for reviewers so thought I’d give it another crack.  I reviewed an EP and it was published!  Turns out there was just some confusion with my first review, it wasn’t rubbish as I’d originally thought (at least that’s what I was told!).  I started writing regular gig and music reviews with Manchester Rocks and then was approached by TBFM to see if I fancied doing some reviews and boom, I now write freelance for two publications, and I publish my own musings on my blog now and again too.


We're all the product of our musical past. What's your musical history? First album you ever bought? First musical epiphany moment? First album that terrified the hell out of you?

“We’re all a product of our musical past”.  That’s a scary statement that probably sums up why I’m a total mishmash of a person ha ha.  I grew up listening to my mum and dad’s vinyl collection which consisted of Nazareth, Bad Company, Thin Lizzy, Roy Orbison and The Traveling Wilburys (to name a few).  I have played the trumpet from a young age too so I listened to Glenn Miller and that sort of thing as well.  I think my musical history is way too long to sum up!  As for the first album I ever bought well the first album I can remember buying (it may not be my first one) was hilariously PJ and Duncan – “Psyche”.  On cassette.  Completely terrible pop album and a fine example of peer pressure.  Hopefully that travesty of a musical offering didn’t reach US shores.  I highly doubt it did.
Musical epiphany moment is a weird one.  I remember listening to “Hooked On Classics”, an LP my mum had, and being fascinated with the fact that all these different sounds were coming out of one black piece of plastic.  It was just a collection of great pieces of classical music but I always loved to dance around my front room to them.

Terrifying albums eh?  Well it depends what you mean by terrifying as I’ve heard some that are scary for all the wrong reasons!  Blood Sugar Sex Magik by The Red Hot Chili Peppers was probably up there with terrifying because it made me feel things I’d not felt before and didn’t quite know how to process.  When you’re barely a teenager and you have Anthony Kiedis singing “I said what’s up now suck my dick” to you, it’s a confusing time! 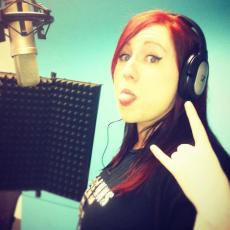 The last album that has truly had an impact on me would be Dot Hacker’s “Inhibition”.  There are no words to describe the utter beauty of that album.  Completely underrated band and the musicality contained in it is other worldly.

There are now more ways than ever for bands to connect with their fans with the rise in social networking etc and I think that’s panicking certain parts of the music industry who are losing the control they once had and they are stooping to gutter levels to try and regain that control.  Music should be controlled by fans and artists, not all the shady stuff in between.  I hate that everything comes down to money rather than talent.  I hear some amazing music and it really hurts to hear that a band can’t get that out to their fans because they can’t afford to get into the studio.  I do love how accessible music is and how you can just nip on the internet and find a new track.  The live music scene, particularly underground, is thriving and that to me is one of the most special parts of a musical journey, playing your creation to an audience.


With so many music sites, how would you describe what you do? What's your unique take on the music and writing?

I’m just a music fan who happens to be able to write.  I don’t profess to be an expert and anyone that does is talking rubbish in my opinion.  That’s the beauty of music, there’s no absolutes and no right or wrongs.  Someone may say an album is rubbish without offering suggestions for improvement which is entirely unproductive.  I think my unique take is that my personality is in my writing.  I’m not beholden to writing in the style of a particular publication, I get to write as “me”.

No.  Not for me personally.  There is so much free music out there anyway, why go the dodgy route?   There are enough bands that are that desperate for their work to be heard that they make it available for free, why not give them a break?


If you could write a 1,000 word essay on one song, which one would it be, and why? What makes that song so important?

I would finish that damn essay on Hotel California!

Oh man, this changes all the time!  I’m going to shamelessly plug Steel Threads, the band I manage.  I shall then say an amazing rock band called Massive Wagons and a band I discovered yesterday, Valve Rider.  All are going to go far, look out!


Tell us about your personal music collection. Vinyl? CD? What's your prized possession?

My personal music collection, as in the stuff I really love, is on vinyl.  I also get sent a lot of music on CD by bands and I have a wealth of playlists on (I shall await the collective gasp) SPOTIFY.  It gets a bad rep but for a music collection that isn’t tangible, it’s the only thing I can be bothered with.

Seeing someone’s eyes light up when I introduce them to a new band.  That, and bands themselves actually saying thanks if I’ve helped them out.


How would your life be different if you weren't writing about music?

I’d probably have a hell of a lot more time on my hands!


Ever been threatened by a band or a ravenous fan?

Thankfully bands and their fans have always been lovely but I did once see a girl get kicked to the floor at an RHCP gig in Milan because she caught Chad Smith’s drumsticks.  That wasn’t pleasant to see at all.

I want to see some of the bands I champion “make it” but mostly I would love to be remembered for just generally helping folk out.  I would also love to start seeing my work in some bigger publications, maybe a regular column of my own.  I’d say Rolling Stone but do they write about music anymore?


Many people may not realize the hours you devote to what you do for little or no pay. Is there a day job? If so, how do you find the balance?

There was a day job and I’ve recently taken voluntary redundancy to concentrate on “The Rock Fairy” a little more.  I do pretty much everything for free so I will need to find a “real job” at some point!  I think things can sometimes change when money is involved.   Not that I’ll turn down an offer if someone wants me to pay me to write straight away!


What's next? Any new projects?

Well aside from my writing, I love developing bands which is why I’ve started “Rock Fairy Management”.  It basically a way of nurturing talent and helping bands be the best that they can be.  I come from a coaching and development background and I’ve done that for over 8 years so it makes sense to transfer those skills into an industry I love being a part of.

Can you have room for two passions?!  I don’t think I have enough room in my brain.   I’d feel like I was cheating on music.  No bit on the side for

Posted by The Ripple Effect at 3:30 AM