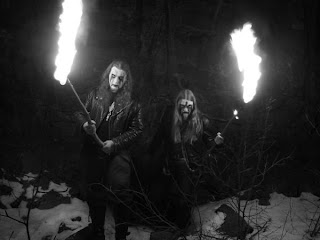 I had, what is in my opinion, the extreme good fortune to live in the fair province of Quebec for a couple of years in the early 80's.  I had always been fascinated by the idea of a French speaking population right in North America and was glad to have the opportunity to go there.   I thoroughly enjoyed my time there.  The ladies of Quebec are beautiful, and being young and dumb and full of, well you know, I did my best to foster good “relations” between Quebec and the US.  The food is really awesome.  I still long for a good dish of poutine.  And if music like this had existed there at that time, I might not have ever left.  But I think at that time, black metal like this was still bubbling and fermenting in Scandinavia.

Neige Eternelle hail from a part of Quebec I did not get to, a place called Baie-Comeau.  Their name translates to “eternal snow”, and having spent a winter in a town called Chicoutimi in the more northern reaches of the province, I can vouch for the fact that the weather does indeed feel that way.  As mentioned above, they play black metal, and they play it fairly traditional and close to the vest.  They also play it very well.  This album has all of the things I enjoy.  There is good songwriting, variety in tempo with there being fast stuff, slow stuff and mid tempo stuff, and it is well played.  It even has that old school production, where it feels like the band set up in an abandoned parking garage, set a boom box in the middle of the room on”record”, and went at it.

Although they have been around since 2008 this is their first proper full length.  It is just the right length as well, featuring 8 well formed tracks.  The guttural, screamed vocals, made even more unintelligible based on the fact that they are in French (at least I think they are, all the song titles are in French).  The blasting drum beats, the tremolo picked guitars, all on display.  As I said, traditional, but awesome.

My particular favorites are “Fier Patriote”, “L'appel de la mort”, and “Pluie de couteaux”.  Yes I still remember my French, no I'm not going to translate.  I'm already bringing this band to your attention, the least you can do is run those names through Google Translate if you really need to know what they mean.  Those are the ones I like, but all 8 songs are good, solid bits of work.  If you love your black metal just as the founding fathers of the genre laid it down, this is your jam.

Quebec actually has a very good metal scene and if you are not familiar with any of the bands from there you should do yourself the favor of checking them out.  Despised Icon is one of my faves, although they have called it quits, but they do some great metalcore.  Neuraxis is an amazing technical death band.  And there are tons more.  But start with these guys.  Whet you black metal appetite with some Neige Eternelle, and then feast on all the other wonders of Quebecois metal.