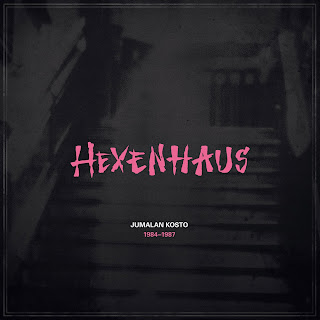 At first I thought this was a compilation of the Swedish band Hexenhaus who morphed into Memento Mori before reverting back to Hexenhaus. How wrong I was! This is/was a Finnish post punk band who spread their nihilistic horror punk between 1983-1987 and this release, Jumalan kosto(God's Revenge) contains their debut single, Ikiyö/Katacombi, an unreleased single, a bunch of demo songs as well as their last ever recording, Suutele minua Kate. Two of the most interesting and upcoming labels, Svart and Ektro, are releasing Jumalan Kosto jointly and I couldn't be happier. However, if I had heard this band back then, I was 12 when they started, I would have shunned them vehemently. At that point their kind of music was far from the stuff I was listening to. As the years roll by I guess opinions change and I absolutely love this album!

I have to admit I had to do some extensive research on the band's lyrical content because I don't speak a word of Finnish and they only sing in their native tongue. Apparently The Cramps, Peter Straub and Herman Hesse inspired their storytelling which focuses on the dark and bizarre. But digging under the surface there's a twisted tongue-in-cheek sense of humour amidst the bleak, harsh landscape. If this research is correct then their lyrics makes sense because to me it goes so well in hand with the Finnish melancholy.

Musically this is a raw, unpolished mix of Killing Joke, Bauhaus, The Mission, Fields Of Nephilim with a coldness that I can only attribute to the band's hometown of Pori. When Hexenhaus were active Pori had been a heavily industrialized city but with the world economy taking a huge nose dive this affected Pori horribly. And a few years after the band broke up the unemployment had reached over 25% and this in a city with less than 100,000 citizens. This must have played a huge part in the music Hexenhaus made. After all, we are to a large extent products of our enviroment.

On many of the tracks the bass guitar is lifted up front and almost acts like a rhythm guitar which to me, is one of the stronger trademarks of the band. That and the disharmonic song structure. Often-times at least one instrument is out of key but purposely so...making Hexenhaus stand out in the best possible way. What I mean is they never followed any set norms, instead they just plugged in and played what came to mind and they stuck to it. And this is what made them so good.
A good number of the songs on Jumalan kosto are purely demo recordings and subsequently the sound quality is not always the greatest. Again though, this adds more to the greatness of Hexenhaus because they utilized the means available in a time where you couldn't sit in your bedroom in front of a computer make great-sounding music. I don't know for sure since there's very little information available about them but these demo songs sounds like they were recorded live in their rehearsal room. This is only my assumption though from listening to this album countless times so I do apologize if I am wrong.

Surprises like this one are awesome because it opens up my world to more avenues of great music, music that would have otherwise gone unnoticed. Also it expands my view on different styles in general, you know my narrow-mindedness shrinks and I look more openly on bands and artists that I probably wouldn't pay any attention to at all. Hexenhaus are of course sadly no more but Svart and Ektro have made us all a huge favour by releasing this compilation album. Now the nihilistic and harsh yet humourous outlook on the world that Hexenhaus had will live on thanks to Jumalan kosto. If you are already into post horror punk you will love this. If you on the other hand want to check out unchartered territory Hexenhaus are the perfect start!