George Duke tribute/Frank Zappa - A Token of His Extreme 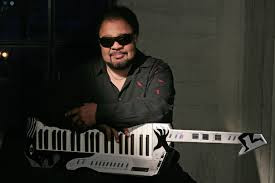 On August 5th, George Duke passed away from leukemia. I had no idea that he was ill and the news hit me hard. George Duke was a great musician and someone that I really admired. I first heard him play on Frank Zappa's Bongo Fury album, the first album I ever bought with my own money, way back in 1975. Later on I checked out some of the albums he did with Cannonball Adderley, like The Black Messiah, and was knocked out by his incredibly funky electric piano playing. George had an amazing career. He played with Miles Davis, Stanley Clarke, Billy Cobham, Michael Jackson and many, many more in addition to a few dozen solo albums. The guy loved to play and could play anything. People that worked with him always praised his musicianship as well as his positive, upbeat personality. Anything that I've heard him play, and it's only a small fraction of his discography, always sounded like he was having a blast and wanted you to have one, too. Ride on, George. There'll never be another.


George's passing reminded me that I needed to pick up the recently released Frank Zappa DVD A Token of His Extreme. This DVD is the first official release of a concert that Zappa filmed at KCET-TV in Hollywood during August, 1974. It captures one of his greatest bands, maybe his best ever, playing in front of a very small crowd in a TV studio. Some of the footage has been released before but never the entire show as it was broadcast. The line-up is Frank Zappa on guitar, percussion, vocals; George Duke keyboards, vocals; Napoleon Murphy Brock sax, vocals; Ruth Underwood percussion; Tom Fowler bass; Chester Thompson drums. These musicians are the core on some of Zappa's best albums like One Size Fits All, Over-nite Sensation, Apostrophe (') and Roxy & Elsewhere. There are some other great live recordings by this band but this DVD is hard to beat. Not only is the music great but there's plenty of Bruce Bickford's completely insane claymation woven throughout the music. If you've never seen what this guy can do with clay, be prepared to have your wig flipped.

The band does killer versions of 1960's Mothers songs like "Dog Breath Variations," "Uncle Meat," "Oh No," "Orange County Lumber Truck" and "More Trouble Every Day." They're all completely re-arranged from the originals and feature great playing from everyone. Songs written for this line up like "Montana," "Florentine Pogen," "Stink-Foot," "Pygmy Twylyte" and "Inca Roads" contain amazing solos and improvisations totally different from other versions I've heard before. The band is unbelievably tight but they're also having a lot of laughs on stage, too. Zappa's guitar playing is incredible. His solos are blistering with a ballsy, bassy tone. Napoleon Murphy Brock is a lot of fun to watch. He has all these Tina Turner type stage moves and really works the crowd. Throughout it all George Duke is up there with his keyboards wailing away with a big smile on his face. He even comes down to the front to boogie with Napoleon for awhile when he really gets the spirit.

Zappa fans definitely need to pick this up. Even some of the people that can't stand Zappa's lyrics might want to check this out. The music is pretty remarkable and truly one of a kind, plus Bickford's claymation must be seen at least once in life. Zappa did some crazy editing on the live footage, too, that will really bug you out. There's also a great bonus feature on the DVD of Zappa's appearance on the Mike Douglas show from 1976. The other guests on the show were Jimmie Walker ("dyn-O-mite") and Kenny Rogers. The conversation between these four is completely bizarre and represents the 70's at its best!