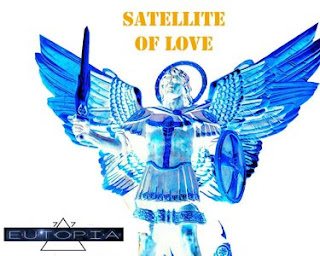 Novel and nostalgic. A chatter of unique sounds and unexpected accents provide background.  The guitars, keyboards and vocals demand the foreground.  It's classic, it's pop, it's dance; it sizzles; it is not entirely sweet.  The compositions build steam, shoot exhaust, achieve flight and enter orbit. You have found Eutopia and its Satellite Of Love EP.

Eutopia is a London based self-described power-pop/electro-rock duo comprised of Alexander Kotziamanis and Leah Lennick. Their music is a smackdown of classic rock, pop and dance. The band was formed in 2011 and Satellite Of Love was released this June.

The EP only contains four songs, "Satellite Of Love;" "City Lights;" "Wave Goodbye (To Yesterday);" and "Life." Each is densely packed with aural delights and oddities that provide a backdrop for fist-pumping, foot stomping performances.  Every time I hear these tracks I pick out some element that I had not heard before.  It is like going on a treasure hunt where you keep finding little gems.  I could easily spend 45 minutes listening to the 17:45 minute EP.

If you are looking for some music that has an apogee, something that will get your body moving and give you an unexpected twist to chew on, leave Nirvana behind and find Eutopia and its Satellite Of Love.