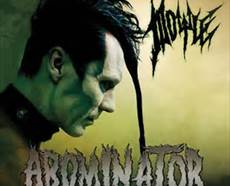 When you speak of Doyle, images of horror punk and Halloween swirl about you. The Misfits.  The dark devil may care persona. In an age when musicians rise and fall at the beat of a tell-tale heart, Doyle retains his legacy as a true American music pioneer. Like The Ramones, Dylan, Alice Cooper, among others, he stays true to who he is and what he believes. His musical life starting as a roadie for the Misfits all the way to this disc has cemented his art form into legacy.  Horror punk. But this disc goes further. Elements of thrash and metal  and even Blues abound.

Abominator is the title track on Doyle's new cd. The song is aggressive and filled with more hooks than a serial killer's basement. The song is good...really good. Very catchy. Powerful. His guitar playing is old school meets modern. Beyond the imagery and the theatrics, Doyle is one hell of a guitarist.  He further propels his Misfits legacy with this guitar driven punk/metal recording.  Fans of the Misfits can rejoice in the fact that this album holds true to their sound while allowing Doyle to expand upon it.  The leaves are beginning to fall and the music is getting louder.

Doyle's guitar sound is as signature as his "devilock" hairstyle.  Intense, powerful, uncompromising.
Title track aside, "Headhunter" stands out as my favorite track. This song  simply kicks ass. More punk than metal this is classic Doyle on the recording.

"Dreamingdeadgirls" is a classic horror punk outing. But this song is also swirling with impressive guitar work. Lyrics are amazing. Great song.

"Land Of The Dead", "Hope Hell Is Warm" also stand out tracks. The songs are well crafted and the interplay between band members is apparent. There seems to be a comfort and a joy almost, coming through the speakers. Doyle has created an impressive album and he knows it.

Doyle carries with him an atmosphere of the real throughout the disc. Like a slow burning black candle on a crisp October night. This is a great introduction to younger fans to the genre of horror punk. For die hard Misfits fans the album will satisfy your every carnal desire. This album reaches out to you and never lets go.

Posted by The Ripple Effect at 3:30 AM