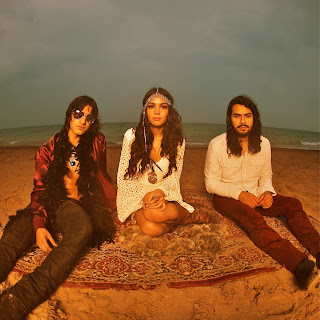 "Killer Moon is a twenty first century psychedelic rock band that sounds like Black Sabbath and the Doors have melted into one another. Feels like an out of body experience under the influence of music."

The Black Sabbath meets Doors is pretty spot on but don't expect skull crushing riifs, this isn't doom metal. This is a psychedelic band playing psychedelic music.I would say their ore closer to The Black Angels than Black Sabbath. I got a chance to see these guys open for The Sword a few years back. I had only heard of them the day before. They are very impressive live and I urge you to go see them if you're nearby Chicago. I had been awaiting the arrival of this album for some time. After many setbacks, it has finally been released and praised by many including one legendary Walter Roadburn.