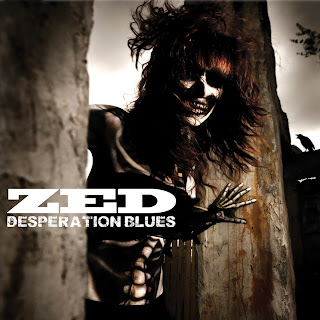 "Great Rock and Roll doesn’t just happen. It’s made. With sweat, swagger and alcohol. And ZED makes rock the way it should be made. Loud guitars, a shot of whiskey and a middle finger. San Francisco Bay Area’s ZED takes it cues from the greats like Zeppelin, Sabbath and AC/DC, but combines them with their contemporary musical influences such as Clutch, Rage Against the Machine and Queens of the Stone Age, creating a mixture that is new, yet familiar. With this explosive sound they are bringing back the guts, the grit and the balls to Rock."

I have yet to write an actual review of this album but rest assured, the music is good enough on it's own that this little blurb should do just fine (for now). It's hard to believe that I've been listening to this album a lot longer than it's been released. Where does the time go? If you haven't heard Desperation Blues, or the band's debut The Invitation, you're in for a treat. Modern hard rock that doesn't suck. Hints of the influences mentioned above sprinkled with a shitload of awesomeness make up for a killer album. I think you'll agree with me when I say that this album is deserving of year end top list material. Whether it's the in your face "Skin and Bones" or the melodic album closer "The River," you're going to love this album.