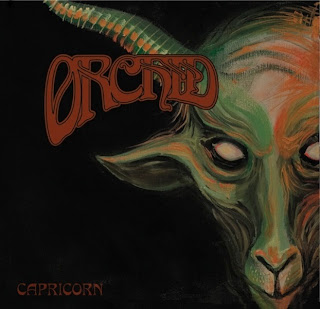 "Classic Heavy Rock is once again making an unstoppable advance onto the music scene. One of the greatest new acts of its kind is surely ORCHID. Founded in 2007 in San Francisco, the band is rapidly overtaking and destroying each and every competitor; and there are many reasons why.
Musically, ORCHID owe their sound to the grand masters of rock. They walk in the footsteps of Led Zeppelin, Black Sabbath and even Pink Floyd – they certainly are generating abundant exhilaration wherever they roam. This musical genre, the mix of blues, folk and hard rock, was surely the most widespread bravura in the early seventies, and those legendary acts mentioned above would easily fill stadiums even today."

I know there's a love and hate relationship with this band. you either love them and their sound, or hate and despise them. I happen to like them despite what the haters say. Capricorn is the debut full length from this San Francisco doom metal band. It's the album that put them on the map and has lead to their signing to Nuclear Blast Records, touring Europe and playing The Roadburn Festival. I've seen this written in numerous places over the past few years but, Orchid plays some of the best Ozzy era Black Sabbath music that Sabbath never got to write. I couldn't agree anymore. The first time I listened to this album I was hooked. The album hooked me almost instantly and I haven't tried to pry away from it's grips since.
Posted by The Ripple Effect at 2:19 PM