Bangladeafy! - This Is Your Brain On Bugs and The Briefcase 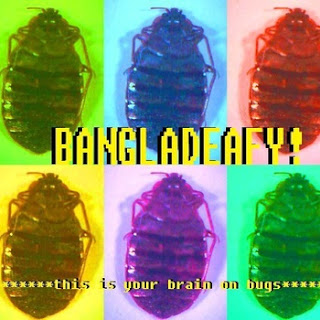 10:30 AM
Senior Agent Penfold exudes confidence inside one of the many anonymous federal buildings situated around New York City.  He steps in front of a group of highly trained operatives who upon his arrival immediately hush themselves.  Everyone in the briefing room was handpicked for this task force.  They all knew what to expect.
“Is everyone present and accounted for Agent Smith?”
“Yes sir.”
“Good.  Alright people listen up.  Today is the day.  This is the day we have been waiting for!  Thanks to multiple anonymous tips we know that our two main suspects will be making a drop at their usual spot this afternoon.  Suspect One and Suspect Two will be together, and they will have the briefcase.  This is our best chance at stopping the spread of ‘bugs’.  If we apprehend the suspects’ briefcase our crack team of scientists can reverse engineer this new ‘bug’ narcotic they’re peddling and come up with an anti-toxin.  Now, do I need to remind any of you agents about the importance of this mission?”
“No sir.”
“I didn’t think so.  It’s go time people!  Get your gear on and mount up.  We roll in fifteen minutes!”

1:45 PM
“Sir I’ve just intercepted an incoming call.  Suspects have arrived.”
“Good job Signals.  Lookout?”
“I have eyes on both suspects.  They have exited their vehicle and are approaching the target building.”
“Are they carrying a briefcase?”
“Affirmative Agent Penfold.  Suspect Two is carrying a brown leather briefcase.”
“Lookout, have they entered the building?”
“Yes sir.  Both suspects have now entered the target building.”
“Copy.  Strike teams one and two.  You are go for assault.  Repeat.  Go, go, go!”

7:00 PM
“Good evening.  My name is Agent Penfold.  Earlier today we took a giant step forward in our fight against the dangerous new narcotic known on the streets as ‘bugs’.”
“Excuse me Agent Penfold?”
“I’m sorry Mr. Reporter, but it is not yet time for questions.  As I was saying…”
“I have an inside source that tells me the two gentlemen you arrested earlier this afternoon have already been released from custody.  Is that correct?”
“Yes.  That is correct.  Now if you wouldn’t mind waiting till the appropriate time to…”
“And all charges have been dropped?”
“Well…yes, but like I said before I am not taking…”
“I’ve also been informed that the so-called ‘bugs’ you were looking for were not found inside the briefcase you confiscated.  Is that true?”
“Look Mr. Reporter.  I don’t know who you think you are but…”
“Would you tell us what WAS inside the briefcase Agent Penfold?”
“I will not comment any further about this ongoing investigation.”
“Then I’m wondering how you can claim to have made a giant step forward in your new drug war?  Thus far you’ve wrongly arrested two young men and confiscated a briefcase full of non-evidence.”
“Look buddy, isn’t there some lost pet or celebrity scandal you should be covering right now?”
“Agent Penfold, are you sure you’re not on ‘bugs’?”
“This press conference is over!”

See?  See what happens?  Do you see what happens waveriders when I take too long to review music I like?  I’ll tell you what happens.  My boss Racer X sends me a message that tells me I might want to check my email.  I open the browser window and boom, that band whose work deserved a timelier writeup has released something new.  Oh, and guess what?  That new music?  Yeah, just as good and just as interesting as the music that preceded it.  Uggh.  I hang my head in shame.  So at this time I’d like to tell you about not one, but two terrific releases from a band called Bangladeafy!.

Yes Bangladeafy!.  The name alone caught my attention.  It turns out that it was generated by combining drummer Atif Haq’s Bangladeshi heritage and bass player/vocalist Jonny Germ’s sensorineural hearing loss.  Clever and catchy!  They call Brooklyn, New York home and they create some extremely interesting music.  Yes indeed, you can chalk Bangladeafy! up as one of those bands that is very difficult to classify.  Their music is highly technical and is bounding with energy.  It contains elements of punk, heavy metal, progressive rock, noise and funk.  Much of the music is instrumental.  Inspired by a piece of advice found in the liner notes of the first Jimi Hendrix Experience album I like to hear these compositions as a ‘psychic-musical war’ between the two musicians involved.  Their playing perfectly complements one another, yet it is no big leap to imagine their performances as epic battles of one-upsmanship.

Bangladeafy! first came to my attention when I received a copy of their debut album This Is Your Brain On Bugs.  I popped the disc in my stereo, hit play, and was greeted by the sound of what I equate to be a spaceship achieving faster than light travel in some early arcade game.  That pulsating electronic sound faded away, the music kicked in, and it was off to the races!  Bugs blasts through ten songs in just under twenty five minutes and it is some kind of ride waveriders!  The musicianship is absolutely top notch.  Song tempos vary wildly, often shifting unpredictably several times in the same song.  Each track has its own unique sonic blueprint.  When they appear the vocals sound urgent.  It’s all invigorating for the astute listener.

Comparisons to other bands fail to do Bangladeafy! justice, but I’ll throw out a couple of the most obvious ones.  “Bedbugs” sounds the most like Primus, “Carsick” could be on the next Beehoover record, and to tie into one of my earlier statements “Young Curmudgeons” has a Jimi Hendrix Experience vibe to it.  Also, while perhaps this is only in my head, the song “Tomahawk” has a gypsy-punk atmosphere that reminds me of Gogol Bordello. 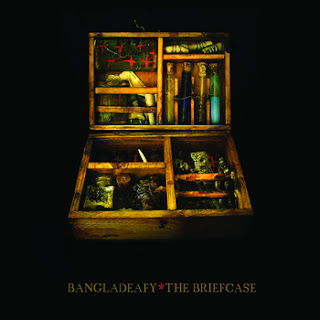 The Briefcase is the name of Bangladeafy!’s brand new EP and it falls squarely in line with the standard of excellence established by Bugs.  One major distinction of note between the EP and the LP is the use of a keyboard or synthesizer to help create the atmosphere during each song, especially “Dumpster Fire” and “Pest Control”.  “Elixir” gets my vote for the group’s most frantic, frenetic recording yet it still takes the time to get your head nodding.  “Show Me The Gold” utilizes strong Latin flourishes to easily distinguish itself from the other tracks.  If I had to choose a favorite “Show Me…” would be the one.

Waveriders, those of you looking for music that is new and exciting have come to the right place!  Perhaps the highest compliment I can pay Bangladeafy! is that I can think of no other group that sounds quite like them.  Pick up either This Is Your Brain On Bugs or The Briefcase EP, or better yet get them both at the same time since Bugs is free on their bandcamp page!  Bottom line, this dynamic duo’s chaotic mix of punk/metal/etc. is a blast to listen to and definitely not something anyone who hears it will soon forget.


Show Me The Gold