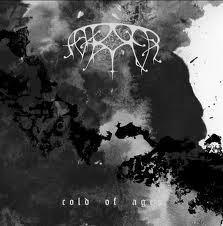 I write these reviews and I do a weekly radio show devoted to underground metal.  I hear a lot of music, and I absolutely love bands like this that aren't afraid to write songs that go where they need to, regardless of how long they end up.  My friends will ask me, “How do you listen to one song for 18 minutes?”  It's very simple really.  The song has something to say, a journey to take you on, so you put on the track and you go with it.  With an album like this, which covers just about an hour in just 4 tracks, there are several journeys worth taking.

Album opener “Descended Lamentations” meanders its way into your consciousness, starting out slowly, droningly, leaving you completely unprepared for the black metal onslaught that starts a few minutes in.  But it isn't done in a jarring way, its a great marriage of doom, almost funeral doom in tempo and spirit, and black metal, American style.    If you listen closely, with your inner being and not just your ears, the music tells you a story, and you can hear the lamentations of the title.  Riveting stuff.

“Phantoms” is the second track and I swear to you, this song sounds exactly like a room full of ghosts would sound.  I can't describe it any other way, but put this track on and tell me I'm wrong.  This track roils and writhes, but always just under control.  Did I mention its probably a room full of angry spirits?  This one has more of a doom, sludge feel and never comes to a full on black metal boil, but it crushing all the same.

Then we have “Convict All Flesh”, just a masterpiece, a great example of how to meld different styles of metal into a coherent whole.  Again, no jagged, jarring starts and stops or transitions, it all flows beautifully together.  One minute the music sounds like its 1 bpm and then you are nodding along to some furious black metal, and it moves so well that you never even notice until after the fact.  Getting back to that nod, I love doom and black metal that can evoke the nod from me.  Not a full headbang, but a definite nod in time to the music.  This album does that in so many places that it is wonderful to behold.

Closer “Removed Forms” begins slowly, just a little drone and some vocalizations, and again, without even realizing how the transition was made, it is raging black metal.  Superbly done, and the last few minutes of this track are about as good as it gets.

This is an album you really must own, especially if you are into USBM.  And if you hurry you can actually find it in album form, on good old vinyl, but its a very limited edition so don't tarry.  Albums like this make me very happy that bands still understand the album format, and know that not all fans of music have been brainwashed to expect a song to last 3 or 4 minutes.  Hell, you never hear anyone say, “Why is that fucking symphony so long?”  So it should be with all forms of music.  In music, just like pretty much everything else, be open and be rewarded.  And this is a pretty sweet reward.