Admiral Browning - Give No Quarter 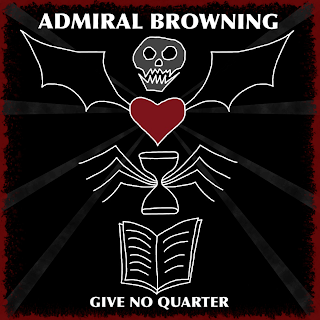 Life is good again, life is glorious! My favourite shipmates are back with a new fantastic album, Give No Quarter. Armed to the teeth with 7 new songs the admiral and his brave crew are ready to take us on another journey across the seven seas and back. As is the case with them Admiral Browning push the envelope and are more adventurous, innovative and balls-out heavy than ever before with their sea-faring skills. So be prepared to go on a trip beyond your wildest dreams and imaginations. Strap on your life vest and keep your eyes on the horizon for anything unusual coming your way.

Upon leaving shore Admiral Browning sets the tone immediately with Theme For Evil. Hitting turbulent waters right away the opening track takes us through the first obstacle with heavy seas rolling over us as our vessel maneuvers elegantly to safety. Ron McGinnis' thumping bass keeps the ship steady while Tim Otis' drumming pushes it forward and Matt LeGrow's guitar playing shoots down any danger approaching us. Thinking the danger is over Leeroy Jenkins pounces on our unsuspecting team. However this extremely talented crew ducks and dives avoiding all problems and difficulties going at it at full speed playing some real heavy stuff.

Zee Birds follows suit as the speed of this ship continues unabated as Admiral Browning never cease to amaze me. The beginning of it is a slower drum-driven part that gradually builds up before exploding. I have followed these guys for years and they just keep evolving. Somehow they manage to retain their own sound - technical, fluent and unashamedly great heavy instrumental rock - while incorporating new bits and pieces that elevates them to a whole different plateau than most other bands, world-famous or unknown. They surpass most of them by light years. Live the band has started to incorporate singing and on Zee Birds Matt handles that elegantly. And the singing continues in Malachai's Lament where Ron sings together with Helena Goldberg from Akris and Lord. The tempo is brought down a notch as the Admiral guides us across calm seas. The stillness is not long-lived as the guys out-do themselves with some truly out-of-this-world playing as they steer us away from even more dangers. By far the most technical of these 7 sea shanties there is such an air of unrestrained beauty within it. While going bonkers with odd time signatures and tempos Admiral Browning keeps everything very structuralized as well. All this combined equals greatness! Having survived plentiful of dangers so far the brave crew launches into more upbeat tones in Traps. Starting out as a mix of jazz and swing it quickly changes to a straight up heavy-ass rocker. The end has a resemblances to the very end of Rush's 2112, side one that is...and it is amazing!

Slowing down the pace of this vessel for a little bit Las Arañas Lobo is initially very Latin sounding where I thought the band had brought Andrés Segovia back from the dead. What Matt plays on the acoustic guitar is beyond worlds and my jaw drops to the floor every time I listen to it. He has always been a great guitar player but the work he does on this song is...I can't find words for it...hmm, put it this way. All you other guitar players out there either stop what you're doing or take notes and lessons from this guy! Gradually the band builds up the tempo and as is the trademark with Admiral Browning Ron and Tim joins in and play lead instruments. Kind of like in jazz but where that genre can be all over the board they keep it flowing. What I mean is when Matt is playing a lead part and either Ron or Tim or both do the same, they still keep the structure of the song intact. There's always a sense and a reason behind what they are doing and that keeps it all together so easily.
Rogue Planet is the last of the sea shanties and we are now adrift on a dead calm sea. No wind is blowing and we're all standing on deck taking in the view while contemplating life. This is another piece where the tempo gradually increases as our ship finally catches some wind again taking us towards the end of our incredible journey.

Individually the three members of Admiral Browning are masters at their respective instruments. I have already mentioned Matt's prowess on the acoustic guitar on Las Arañas Lobo but that's just a part of it. There is nothing he can't do with a guitar but his class is that when playing incredibly difficult technical parts he does it with such ease. And he makes his guitar talk instead of simply playing chords and riffs....truly amazing! Ron is the one who keeps it all together with his earth-shattering DeArmond bass but oftentimes he takes the center stage playing the lead or he and Matt trade solos back and forth like a twin-guitar attack. The swiftness, elegance and ease of him changing from rhythm to lead to solo and back is beyond me and the sooner I stop to try to figure it out and just let his playing absorb me the better...because I'll go crazy in the process! The steam engine that is Tim Otis keeps the ship going but just like his two shipmates he steps forward and play lead parts as well. With the flick of a switch he goes from barely hitting the drums to completely annihilate them to make them whisper and make them sing before reverting to a rhythm position. Never missing a beat whatever he is doing his amazing drumming allows Matt and Ron to do anything they want to. And while they all are following the tapestry of any of their fantastic songs, Tim can just break out and play odd off-the-wall stuff with a furiousness akin to Animal but before you know it he is back in line keeping the beat for the others to follow.

Admiral Browning are revered by those who knows about them but they are criminally overlooked by the larger masses. Maybe that's how they want it and they are simply following their master plan. For a longtime supporter though it's frustrating to see and hear the crap media focus on when bands like this won't get the time of day. America has a bottomless well of musical talent where Admiral Browning are in the extreme top tier but they have to rely on DIY ethics when they should be in top of all charts out there. Don't get me wrong because I don't mind the DIY movement at all, it's a healthy counterpoint to the megalomaniac attitudes of the major labels. However, it doesn't stop me from getting pissed when a band as amazingly great as Admiral Browning are still in the fringes. So don't only make yourself a favour but real music in general by getting Give No Quarter because this album is just about as great as it gets.