A Ripple Conversation with Tragedian

1.First let me say thanks for taking the time to do this interview. Tragedian has a new album coming out and you must be busy.  Your performances in such bands as, Tragedian, Stormwarrior, Deathriders really shows a musical maturity and incredible depth of knowledge of the genre. Your skills have tripled since we jammed. (A side note, we were in a little band called Witch Meadow, a long time ago. Before Witch Meadow recorded its first albums.)  What are your plans for touring behind the new disc? Any festivals in mind that you might play?
Your very welcome and always a pleasure to speak to the press and to the fans directly.The new Tragedian release "Decimation"will be released worldwide on July 27,th by our new label Ice Warrior Records.It will be available in shops as a physical CD or online as download through I tunes, Spotify, Amazon and various other various legal download sites. Till now only one show will be played in support of "Decimation" as the European Tour planned  was pulled due to an amatuer booker who doesn't know his ass from his elbow. Busy indeed i am at the moment scheduling interview requests,Prepping for a 2 week European club tour with Helstar Singer James Rivera, then coming home and start rehearsing for the hometown gig/record release party for "Decimation" while trying to conduct interviews , do laundry and open 2 weeks worth of mail.Since moving to Europe i more or less dived head first into the scene playing with anyone or band who had an opened position on either guitar bass or keyboards.In the same time i discovered a lot of bands that were unheard of in America at least at that time like Grave Digger,Running Wild, Freedom Call ,Gamma Ray and Stratovarious.For what ever reason the level of musicianship was always higher in Europe, not the usual basic arrangements say like bands like Poison, or Warrant but there were some exceptions like bands like Fifth Angel,House Of Lords,Chastain and Warrior. Stormwarrior was my first introduction to the Hamburg scene.It started out great turned and ended in a disaster upon my leaving but today were somewhat on friendly terms since somethings were talked out which weren't back then.The job with Neil Turbin's Deathriders i got through a really great and close friend of mine Steffi who i met upon arriving here.She was friends with Neil and on new years eve 2010/2011 , she called me and asked if i would be interested to tour with him playing the Fistful Of Metal  cd and some of his solo material.Apparently his then guitarist couldn't  tour unless his wife tagged along,thats how i got that gig.Another situation that started out great but ended in hell as Neil is a very difficult person who still has a major chip on his shoulder , (i think it has to do with him being kicked out of a band that got mega popular after his firing) which effected everyone he worked with.Witch Meadow was a fun time apart from the high level of bullshit that occurred from time to time,i honestly don't regret or wish to change any of the time we had together at that time.
2. Any chance of returning to the states with your band and doing some gigs?
Would be great  and i would love to one join one of our contemporaries on a double headlining tour through the states, but unless we find a promoter willing to bring us over and help with the organisation involved,it's most unlikely.
3. I know you travelled to Germany from the United States in pursuit of finding an audience for your heavy metal music. How was the adjust to life there versus the life you left behind? 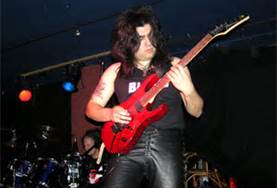 New England and Germany are very simular especially in terms of atmosphere and architecture. Hamburg is also know for have a major university in the middle of the city and a large port like Boston.There are many similarities in certain corners of the city that remind me of where I'm from.The night life is great nothing closes till 6 in the morning, the subway and buses run 24 hours , a taxi ride from my flat to the city center is around  $13.00 tip included and a wide variety of restaurants from every European country including the Baltic states.In the early days at the local hotspots like the Rock cafe,Headbangers Ballroom and The Backstage club you would find on any given night Michael Weikath and Markus Grosskopf from Helloween and Kai Hanson or Henjo Richter from Gamma Ray , Lars Ratz and Mathias Lange from Metalium and various other session and local musicians and record industry people The only major adjustment was learning to read , write and speak German.

4. Do you think you could have as much success here in the states?
Nowadays i would say it's possible,had this been the time frame between 1995 and 2001 before the wide spread of music on the internet, i'd say no.. I like to refer the early to mid 90's as the "dark ages". Musicianship was a dirty word and you were doomed if you knew how to play or even worst,if you knew how to tune your instrument.Right before i left for California,i briefly played with a drummer ,bassist,keyboardist and singer from my home town in Cranston who introduced me to a lot of Power Metal bands like Crimson Glory,Fifth Angel, Apocrypha,  early Fates Warning and the first Dream Theater cd.The 3 songs that were created in that time got revamped and ended up on both Tragedian cds.Had the musical climate been different,then we would of had a good chance. when i finally realized the Rhode Island music scene was dead and buried in the summer of 1995, i made the mass exodus to Hollywood ,California only to find a music scene with very little or no demand for metal musicians especially shred guitarists. I started hanging out at the local hot spots like the Rainbow and the F.M. Station and started meeting people and making contacts.The first serious band i put together was Called Premonition, a mix of Dio era Rainbow , Mark III Deep Purple and Pretty Maids.We actually had a manager and high profile gigs like opening for Tony Macalpine, Fates Warning and Phantom Blue.Funny enough the majority of fans and people in the audience were the European tourists & students from Musicians  Institute.The obvious choice was to move to Europe at the suggestion of 2 German friends of mine.Once i arrived  it was a whole different ball game , and the European musicians and  i were speaking the same language musically.
5. What is your live set up  for both guitar and  bass?
If you remember my set up back in the early Witch Meadow days it was a guitar and halfstack.When i moved to Los Angeles , i  added to the halfstack various 19 inch components like a wireless,power supply, rack tuner ,Shelfs , etc and at the end of the day i had a rack the size of a refrigerator.Nowadays since i'm traveling a lot by plane and train,i reduced my rig  to two guitars or two basses  and the Vox Tonlab EX ,a direct pedal board with integrated D.I. output,tuner  and tubes and my picks and strings .All i really need now at the gigs is any amp with a clean channel for stage volume.If the amp should ever break down, the Tonlab can be plugged into the sound desk directly and rely on the side fills and monitor wedges to hear what i'm doing.
6. top five guitarists?
Ritchie Blackmore, Yngwie Malmsteen (84 -99),John Norum, Vinnie Moore & Tony Macalpine
7.  "Dreamscapes" was a solid album. What inspires you the most when creating ?
It all depends on what I'm feeling at that particular moment especially looking out the window absorbing the weather, which instrument is in my hand ,either the bass,guitar or keyboard and for which project of mine i'm composing for. I usually sit in front of the computer and watch documentaries on youtube. If I'm writing for Tragedian , I'll watch anything from religion, true cases, the occult  or historical.When composing for My Thrash project "Graphic Violence" i tend to watch more social topics like, the Chernobyl explosion, life behind the iron curtain,the Russian jail system and let my reaction of what I'm watching reflect in what i compose in that moment.When i compose for my instrumental project , i do it when a friend/ fan of mine  comes to my flat to visit and hang out.Her name is Vanessa and she's a natural beauty in looks and as a person and the many emotions i feel, i translate either on guitar or keyboard  just by having her sit in front of me.
8.  Are you a fan of heavier bands like, Machine Head or Children Of Bodom? Or are you a traditional metal fan?
Somewhat, for example  i like the music of Children Of Bodem & Amon Amarth but not really a fan of the voice.The unusual exceptions are  Dimmu Borgir , a Symphonic Black Metal band from Norway and Therion from Sweden.I'd say 90 %  of what i listen to is traditional stuff like Iron Maiden,Deep Purple,Ratt,Dokken, Fith Angel and House Of lords.
9. Where do you see yourself ten years down the road?
Hopefully Still doing what I'm doing today. Earning my living through music either as a writer,producer or session player.Touring Europe ,meeting and working with as many musicians Metal and  non Metal as possible.
10. Any regrets?
Actually yes, after being a few months in L.A. ,i discovered a record shop that sold import mags like Kerrang, Rock Hard and Heavy oder Was! from Germany and a few others.Upon reading through these mags i saw the booming metal scene in Europe and i started getting a gut feeling to migrate to Europe Mainly Germany then and there,who knows where I'd be today had i done that.
11. Anything else you want to add?
It was a pleasure doing this interview especially with writers who do their homework on the artist's in question instead of the same run of the mill questions.Most of all , great to reconnect with you again and talk about the old days and i do hope we meet again in person.Despite the fact that music is still being be downloaded illegally ,it's not as much as it was 10 years ago and the industry is picking up.To all fans who loved "Dreamscape" will for sure love "Decimation". Even though the members changed once again you should see it as Chapter 2 in the history book of Tragedian although this line up will be together for a long while.Grab the new cd if you can , new merch will also be available and drop us a line whether you love it or hate it and see you all somewhere somehow...Prost metalheadz...........