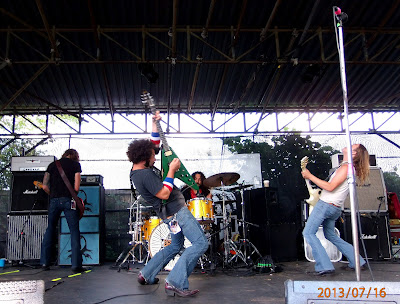 My first interview of the day, and my first face to face interview ever, was with Aryn And Tom Of Scorpion Child. Their album of classic rock riffs and a Seattle meets Zeppelin sound is amazing. They sauntered in to the press area, sunglasses on and totally cool. Nothing rock star about the two of them, they were as real and honest as anyone. The music reflects this. Under the brutality of the summer heat we dove into the interview headlong.

How do you guys like the tour so far and the weather here in New England. I know your band is from Austin(Texas)?

We like it. Different heat up here. Humid. Playing in it every day can be a little bit taxing. But we like it. You get adjusted to it.

The album is excellent by the way. Plenty of influences from Zeppelin to The Black Crowes, and Austin Blues, even early Soundgarden.

Thanks. We are just trying to right rocking songs you know. It ends up sounding like what it sounds like. So many hands in a five piece band. Everyone is very opinionated. We try to play what we like to hear.

Do you have time to write on the road?

Not a lot of time to write .Challenging. We are the band that has to leave when it's over. We have a van, but there is no room to play. We end up chasing the tour busses around the country. Writing happens on your days off.  Songs for next album might be heavier and more experimental.

This tour and festival mainly consists of metal bands and metal fans. Do you find acceptance for your classic rock vibe easy or hard? 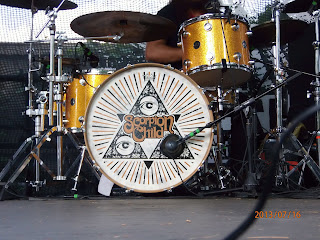 Any surprises on the tour?

Oh, all the time. (laughs). No equipment failures, knock on wood. It's all good on this tour.
Overseas gigs?

Mayhem ends in Dallas August 4th. But we are going overseas in November with Orchid. About 15 dates. We will do our own tour. Be about as long as this tour.

The Zeppelin influence is obvious but do you hear the reference  too much?

It's a place for people to come to together on the sound. We get it. Anyone who says they are not a fan of zeppelin is lying. My mom likes Zeppelin. It's an honor. It's cool. people have a tough time saying what we sound like. We like all music. All big fans of late nineties Seattle music. The dolls. Some metal. I like zz top.
Is it tough being on the road?

You do what you have to do. You come home and after awhile you need to get back on the road again. It can be tough if you have kids but it's something you do. It's a trade off. A week home is sweet but then you're like ok let's get back out.

Does that help with the writing?

Not really. we don't have time. We go a few days without playing and then we start to write and then we are back on the road. We have a lot of riffs already. Gets frustrating when you have the riffs ready to go but you have to wait. At home we party all the time but here on this tour we don't have much time for that. We have to drive the van so we can't party as much. The other bands with tour busses and drivers can but we can't as much.

Well with the power of this album you should have your own bus soon enough.

We are focused. We have to be. Having the van keeps you motivated. I'm sure one day we will look back and say we used to have so much fun driving the van. (Laughs)

That concluded our interview as the day was busy and set times came up fast .I thanked them for their time and they disappeared back into the rock and roll circus known as the Mayhem festival. Later I caught the first couple of songs from their set. You don't watch a band like Scorpion Child, you feel it. You feel the music. This is a band to keep your  eyes on. Pure rock and roll. Honest and real.