A Ripple Conversation with Rachel Bolan Of Skid Row 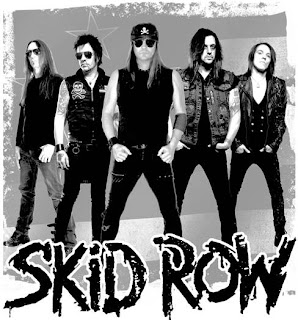 The idea to release 3 albums over the course of months is new. Each album gets to have its own turn in the creative spotlight. United World Rebellion Chapter 1 is a power house of a hard rock album. This picks up the sound from the "Slave To The Grind" era of the band. They  have  never sounded more focused and intense especially, on songs like "KIngs Of Demolition", "Stitches", and "This is Killing Me." New music will continue to flow from the hard rock machine that is skid Row. These guys have been rocking stages around the world for decades and their perseverance and dedication to themselves, the music, and the fans comes through in every aspect.  And this much is certain, the first release is full of hard hitting, rocking tunes that deliver.  I talked with bassist, Rachel Bolan about the album, life on the never ending road, and the future of Skid Row.

So this album is actually one of three that will be released?

Yeah when it came up it kind of appealed to us to do this. Instead of waiting seven years between records.(Laughs) It keeps our chops up. Keeps us creative and in this age we are living in, it kind of fits. we have never done anything like this before. It's really cool. we are in the process of writing the second one. Keeps the creative juices flowing plus the fact that we will have new music steadily coming out. People kind of like it. It's funny I have a d.j. friend of mine and he's like I only have about enough time between home and work to hear five songs.  I was like" then this is perfect".

I think the album is just a solid piece of work. "Kings of Demolition", and "Stitches" are two of your best.

Awesome man, Thank you very much. 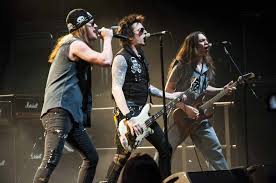 Do you have a favorite track yourself?

If I had to pick one it would probably be "Kings Of Demolition" The song is really aggressive. I am really proud of the lyrics. It makes you want to go out and smash something. Which is the making of a good rock song.

Your favorite Johnny Solinger vocal on the album?

Well..."Kings Of Demolition", he nailed it. But everything he touches is great. "This is Killing me", his voice is amazing.

How many songs will you play live from this album?

Right now we are doing two probably do three at the most The later we get in our career you start noticing that there are songs that we absolutely have to play. You have to watch the set times. Someone gets pissed cause you can't play this or that. We do about an hour and forty five minutes and we try to get everything in that we possibly can. On festival shows it  becomes, oh man we only have an hour. What are we yanking out of the set?

Do you Ever Get Tired Of playing the old songs?

No man. I'm so proud of those songs. It's part of my life. It becomes part of your soul. Sometimes you get tired of the set but never the songs.

Eddie Trunk on That Metal Show did a rant about how the term "Hair bands" hurts bands from that era. How do you feel about the term?

You know what? It's stupid. It's almost stupid as the term grunge. You know but it is what it is. People call it hair bands because they like us and they come to the show. they can call us jazz fusion, if they like Skid Row then that is all that matters. So many great players came out of "Hair Bands", Bill Leverty from Firehouse is an amazing guitar player. Just cause your under the term "Hair Band" doesn't mean you can't be a great musician.

Craziest experience with Johnny on the tour?

Craziest experience with Johnny? Oh man that's big. I don't remember where we were on the tour. I was on a martini drinking phase. We went to a bar in, I think Texas. A bunch of Johnny's buddies were there. So I ordered him a Martini. They set it down in front of him and he goes" what's this?" I said it's a martini and he slams it down in one shot. I'm like dude you just drank like a whole glass of vodka. This was on the Kiss tour actually. Needless to say we ended up carrying him from bar to bar that night. We had a lot of laughs.

Any plans for a dvd?

Pretty sure the label wants one and after some festivals next summer. I'm sure we will have one.

Playing in different arenas and clubs do you have a different mindset for each one. You know U.S. gigs versus European ones?

It's weird you are exposed more. Like playing in your underwear. You have to build your chops. But it's cool. Over in Europe the fans just want to see good rock music being played. They are loyal. American fans are also very loyal but here they have issues with changes in the band. True for any band. When it's all said and done people come to the shows for the same reason. We have a core audience but your starting to see a younger crowd now. It's incredible that these young kids, who weren't even born when the first record came out where there rocking. Incredible. Leather jackets and patches. Great feeling.

Top 3 Bass players that you admire?

Paul McCartney, Gene Simmons, and Graham Maby, from the Joe Jackson band on the first three records.
Seeing Gene play is amazing. For me that was it. Growing up listening to these guys and the Ramones and then you meet them. Some people still don't realize what an amazing bass player Gene Simmons really is. A lot of people wouldn't cite him but he is amazing. He does all these walking bass lines. He has a passion for being a bassist. I think, I would pass out if I met Paul McCartney. Actually met Graham Maby at a guitar center. I went over and was like hey man I'm sorry I'm in the band Skid Row and I'm a big fan. He was like " I know you guys". It was cool. First time I was ever star struck. We live close to each other. One day I got a package in the mail and it was one of his bass guitars with his autograph. It is one of those things I will treasure forever.

Don't have such a strong opinion on some things and who to trust and who not to trust. And I would also tell myself to follow my gut feeling more.