A Ripple Conversation with Kobra Paige - Kobra and the Lotus 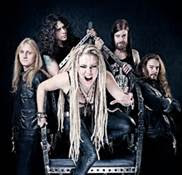 There is hope for those of us who thought the classic metal style band had faded away. For those of us who still appreciate tearing guitar solos and soaring yet understandable vocals, there is hope. Her name is Kobra Paige and her vocal delivery is both beautiful and powerful, intense yet melodic. Kobra and The Lotus have achieved what every young band dreams of through years of hard work. A quick, keen, ear from Gene Simmons and this band is catapulted to the festival stages of Europe and the metal halls of the U.S. This band, and make no mistake this is a band and not just a backdrop for the female vocalist; this band is pure classic heavy metal power. Unleashed onstage they are a tornado of sonic mastery. A hurricane force of unstoppable power metal. Judas Priest, Queensryche,  Metallica, Iron Maiden, it's all here ready for you to enjoy. This is the future and the past of heavy metal rolled into one. There was once a dream called Heavy Metal that could only be whispered about until  now. Here there  is hope.  I talked briefly with Kobra Paige, lead vocalist, as they drove to another city, another gig. I found her to be very personable as we discussed the album, recording and the future of the band.

How is the tour going?

Oh man It is going awesome. I guess we are already halfway done which is hard to believe. It is so short and sweet. We have Denver, Las Vegas, Arizona, L.A, and we finish there.


So what is next for the band?

Then we actually are going back into the studio. So we are going to start recording and working on new vocals. I can't wait for that. 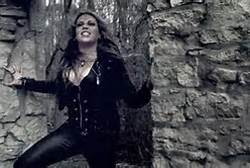 The Album is truly amazing. "50 Shades Of Evil" is hands down one of the best metal songs I have heard in a long time.

Oh cool. Thank you very much.


Kobra And The Lotus has just a classic metal sound. How did you first get into metal?

Actually it is pretty simple for me. When I saw Judas Priest at 15. I saw them and that was it. it just turned me right on from there.


And you are classically trained?

Yeah I studied piano and vocals for 8 years. Started when I was 8.


Touring so much is it difficult to stay healthy on the road both vocally and physically?

It can be. Especially if you don't get enough sleep. Luckily we have a driver for the van so this tour it has been easier. It's go go go the whole time. It's really hard when it is cold. Right now it's nice because it is summer but when it gets cold. Then someone gets sick and then we all get sick.


European shows versus American shows. A big difference or not?

No. There is not a big difference at all. The only big difference is the cultural changes. There are actually different ways in which different countries will watch and enjoy the music. Some people are way more observational and they like to be more conservative the way they watch the music. They shout out when the song is over but during the song they stand there and just watch. Just a lot of interesting cultural differences. North America is really really fun. The European festival crowds ranged from 2000-10000 so we had never played for that many. It was humbling. It was great meeting so many bands you admire. An honor. The response has been great.


The video process. Enjoyable or something you hate but have to do?

I think it is fun in the beginning. But then after you film the same song ten times or a hundred times. It can be fun. But halfway through we are all just ready to head home. we are like "o.k., we can't headband anymore"(laughs) It is tiring. The same song over and over.


You mentioned going back to the studio. Do you get a chance to write on the road?


No. I don't write on the road. There is no time. Whenever we get a break at home that is when we get down to writing. we already have a ton of demos. we are prepared. we are not stopping there.


Do you shut everyone out when you head into the studio or do you take advice from outside the band for the tracks?

We definitely look for criticism that is constructive. The label especially. they can tell which songs might be stronger. So we listen to them. "50 shades" came into play that way. We wanted to hit the audience with a wall of energy.  The songs we wrote after that advice were the result of it and I find the advice can be very good.

Crazy stories from the road?

On our last tour with Fear Factory we had the worst time with our van. The gear trailer suddenly appeared on the side of the van. Our trailer with all our gear was now traveling next to us. It had come loose. We had to swerve off the road. Our driver would fall asleep or cross lanes. The driver was really bad on that tour. Our tour manage arranged a midnight move, we changed to another bus and left.


What is the future for Kobra and the lotus? Headlining tour, dvd?

Oh man. We would love to have a dvd. Maybe down the road when we have a larger fan base to support it. I would love to record a live dvd. That would be great. I was just given an Iced Earth dvd by a fan. They gave me some of my favorite candy and the dvd. It was great. It has Matt Barlow singing on it and I was so pumped. He is one of my all time favorite singers. I love seeing metal performed live.

So everyone can bring you some, what is your favorite candy?

Raisenettes. I love chocolate but I really like chocolate covered raisins. (laughs)


The metal community seems to be more accepting of newer bands of different sub genres. Do you find this to be true?

It is great to see a lot of different people. It's all metal but different genres. wildly different groups that come together at shows. Fans that never would have crossed each other's paths suddenly come together.  It's awesome.

Posted by The Ripple Effect at 2:30 AM

This is a an awesome interview!! Totally enjoyed the read! Thank you so much!!!