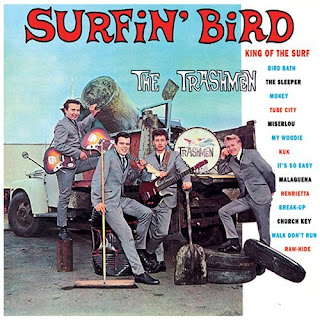 Year......1978.  I just had gotten my first record player for my eighth birthday.  It was one of those box record players that had a hinged cover and a internal speaker......and it was orange.   I got some crappy K-Tel record also.....but was not very impressed except for "The Rubberband Man" track by The Spinners for some reason.

Not Long after my mother arrived home from spending a morning going to yard sales and  brought me home a stack of records.   What caught my eye was these guys in blue suits with their instruments (and a broom and shovel) posing behind a truck.  A crazy red font across the top "Surfin' Bird".  This had to be played right away.  At the time I did not know this album was made up of mostly covers....but this did not matter to me.  First track......"Surfin' Bird".   I drop the needle......BAAAAAMMMMM.  Something punched through my chest grabbed my heart and started moving my body to the heavy beat, low bass line of this crazy ass song.  I am listening to this track right now and I get the same feeling.  I can not help but move around in my desk chair with my head moving around.  This was it......this is where I fell in love with music and that song alone has had the HEAVIEST impact on me.  Let us not stop there kids.  I do have to say the rest of side A was not very interesting to me......but still had that nice driving beat and wonderful and typical surf guitar work.  Side B......Whaaaammmm........."King of the Surf", "My Woody", "Bird Bath" (another weird ass song) and another favorite "The Sleeper".  A few of these songs were stories like "The Sleeper" and had sound effects that really keeps the interest of an eight year old better than say........a Dylan song.

Overall this album has steady hard hitting beats and the bass line was on that low end that made the speakers just throw that bass that feels like your heart is reverberating to.  There is no other way to call anything heavier when the bass and beat of a group of songs feel like the are physically pushing down on and through your chest and making your body uncontrollably move around.  Then add in the great surf guitar, story telling lyrics, weird vocals and sound effects.......what the hell else can you ask for as an eight year old??  Kiss "Rock and Roll Over" I got a few weeks later.......but that is another story and still did not have the heaviest impact.  So.....My pick for Heaviest Album ever for me is The Trashmen - "Surfin' Bird".

Posted by The Ripple Effect at 8:23 AM