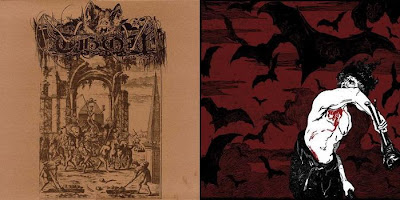 So I have been asked by my good friends at The Ripple Effect to write an article about the heaviest album I have ever heard. Well that is a tough one. What I define as heavy could be classed as heavy as Justin Bieber by somebody else.

I spent a long time thinking of suitable albums I have heard over the years. Usual suspects started to appear mainly the legendary Thrash/Death/Grind Metal bands I used to listen to in my youth. Well I say youth I didn't start fully appreciating metal till I was 18 years old as I am ashamed to say I was more into Dance/Rave culture back then. But thank fuck I snapped out of that one or Sludgelord Blog could have been something else entirely.

Until I heard the début full length by a Sludge/Drone/Doom Metal Band by the name of THOU from Baton Rouge, Louisiana And that album was their brilliant début  – Tyrant.

Tyrant is still one of the heaviest records I have heard to date. The amount of power this band has in their music is undeniably vast and anything unlike I had heard before. The opening riffs of Tyrant still gives me goosebumps almost 6 years I have heard this record. Then Bryan's vocals kick in and you know your going to get seriously fucked up for the next 59 mins or so.

This album is drenched in thick sludge. It oozes violent raptures of sheer brutality. This is Sludge Metal at its most raw. THOU lay everything on the line here. You can feel their pain right from the start.

I knew from the very song that Tyrant would be a very special album indeed. Thou include some haunting beautiful melodic riffs amongst the carnage. THOU are a band who captured the very real essence of NOLA based music like I had not heard at the time in 2007.

2nd track -  I Was Ignored.  And Judged.  And Cast Down – carries on the sheer brutality that Thou laid down with Tyrant. Playing epic riffs matched with brutal vocals that can change your entire beliefs.

THOU continue playing huge epic slabs of Sludge Metal mixed with Drone and Doom Metal that many bands cannot match. Some have tried but many have failed. Tyrant is one of the most powerful albums that Sludge Metal has to offer. It's a thought provoking masterpiece into the darkness that mankind has lurking away. It's just THOU can see this better than most people and they have to tell the viewer what is actually going on.

Check out the brilliant album titles as even they can cause a negative reaction in people.

With a Cold, Life Extinguishing Elegance
Fucking Chained to the Bottom of the Ocean

These tracks aren't exactly uplifting bundles of joy. They are songs full of despairing nightmarish lyrics and brutal riffs to match. And I wouldn't have it any other way.

THOU may have gone heavier with each and every release they have committed to the world so far. And there is a lot of them. 3 full lengths and a huge number of EP's showcasing that THOU are one of the hardest working bands in Sludge Metal today.
People might say – “Well Steve. Yeah it's heavy. But I have heard heavier.” Well that maybe. Primitive Man's début album Scorn is a heavy as fuck masterpiece as well. And they have a lot in common with THOU.

But this album got me back into Sludge Metal in a big way. I just had to hear more. I discovered a lot more great bands as well. I started writing for other blogs and webzines. Mainly starting the build-up for Sludgelord blog.

So THOU rekindled my love affair with Sludge Metal once again. And it has never gone away. Am still doing Sludgelord almost two and a half years later. Though I had to include this album as well mainly because of one track. Acceptance.

Acceptance is possibly my all time fave THOU track and one of my all time fave instrumental tracks. It shows THOU at their most endearing and most creative. It's an epic tale told through the power of riffs. Even there are no vocals it still packs an almighty punch. It's so powerful it can bring tears to your eyes. Though it's a style of music that THOU haven't touched upon since. I hope they will do one day as it shows they do have a caring melodic side to them.

Well I have gone on long enough. My reasons why Tyrant is one of the heaviest albums I have ever heard. If you haven't heard this masterpiece then hunt it down now. THOU have it up for free download on their excellent website along with some of their other brilliant extensive back catalogue.

Written by Steve Howe aka Sludgelord

Check THOU from links below