The Heaviest Album I've Heard - Neurosis - The Word As Law 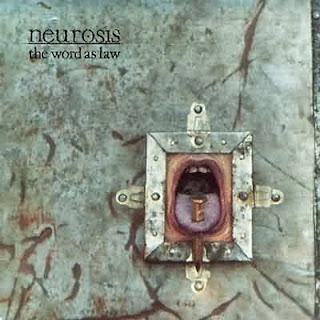 Great albums change your life. Great albums can also play the soundtrack to your life’s biggest changes. The music you listened to when you were a teen, and if you are like me you listened to it voraciously, has the ability to shape who you are today. When I was sixteen, I went to my grandparents in a small college town in the midwest. I picked up Neurosis’s Pain Of Mind (released in 1987, Alchemy Records) on tape. Before that we were really just punks. My band at the time was a Flipper wanna-be band because we couldn’t play. I took that tape back to my suburban town and me and my friend’s minds were collectively  blown. We knew that the times they were a-changing. The intensity of that album, it’s raw passion and virulent head crushing trauma, it turned us around. Crossover had finally arrived.

As great as Pain Of Mind is it’s obviously an early attempt by very talented youth, to forge a new and heavier sound. The sound only got heavier on The Aberration seven inch (released 1989, Lookout! Records). By the time they got to recording The Word As Law (1990, Lookout! Records) they were a massive force and the wave was felt all over the country. The crust kids were well aware at least. They played often in the Bay Area with acts like Paxton Quigley, Filth and Spitboy. I think The Word As Law is the heaviest album of the early nineties at the very least, on the Lookout! label. There was a lot of competition for a Heaviest Album Of All Time and in the end I picked it because as a compact album, with only eight tracks originally, it brought epic and dark d-beat to the top of the mountain. Similarly Bolt Thrower managed to do this a couple years earlier with In Battle There Is No Law! but, while that was reaching the grind core set, The Word As Law pushed a generation of punk rockers into metal.

From the minor note that starts the album Double Edged Sword kicks in low and dirty while the bass moves quickly and deliberately. The lyrics already hint to future landscape the band would inhabit "endless war". On The Choice, Neurosis is still in their roots but hint at even darker and punctuated anger maybe due to the addition of Steve Von Till. but the echoes of a younger band invade this track and contains one of their best choruses; "sacrifice your security".

On Obsequious Obsolescence The band shifts gears into the sludge territory that the East Bay famously revels in. The guitar play is quick and tight though. Reminiscent of Rudimentary Peni's early output. Similarly, both bands came untethered from their original sound, and somewhat untethered in general. The anti-television lyrics of the song aren't nearly as important as the way the vocals of the singers play against each other. Loud and screaming in one ear, low and spoken in the other, like the dissonant voices in the head of the modern man, schizoid, alone and afraid.

To What End? has Neurosis stretching into the six minute mark with more apocalyptic visions. Human as chattel, a grinding machine that turns the world into a wasteland. A flaming gas well in everyone's backyard an industrial hellscape. To the question “are we alone”, in the end it might not make a difference if the planet is uninhabitable. The track is all around dynamic, with quiet parts that build and build and actually explode with strength that the younger band could muster. Though the crescendo of anything after Word is a massive beast of another kind.

On Tomorrow’s Reality we spiral further into neurotic split-brain fear the kind you get by letting the scales fall from your eyes, the realization that it’s as bad as it seems. The destruction to the environment won’t be fixed by negative think though and naval gazing; “tonight’s nightmare is tomorrow’s reality, you look for betterness in everything you see, but poison all hopes of what might be” . The wheel’s of progress inch forward crushing those who are unable to keep up. All set to a soundtrack of charred carbon black.

What comes next is one of the more interesting oddities. Clocking in at forty four seconds, Neurosis really cuts the crap on Insensitivity. A stand-alone song it gives nod to the first wave British crust that played such a great influence on Pain Of Mind. Short and sharp it cleans the aural pallet for the epic closer Blisters. It is seven minutes and a new breath for the band. There is a seething build, spiraling structure yet spacious tone, punctuated with guitar leads that are very close to classic rock. More dystopian lyrics, a heart rending cry against consumerism gone mad. The suffocating feeling of never having lived, wasting inside a factory.

The Word As Law shook the punk community, it finally took the music seriously, it crossed into territory originally reserved for metal, it mixed the scarred-earth, blackened crust of bands like Amebix or Antisect and added sludge. The walking bass lines that front the album give it hooks and listenability and is a relic of the nineties that I miss quite a bit. This album played on repeat for a couple years and bonded a community of fans of heavy music. Some would hear Souls At Zero and try to listen to it in many different ways. Place it beside what they had created before and eventually reconcile the change and follow it to the end, celebrating one of the heaviest bands of all time. I’m going to be listening to, and marveling at, this strange heavy, heavy album for the rest of my life.

Posted by The Ripple Effect at 2:45 PM