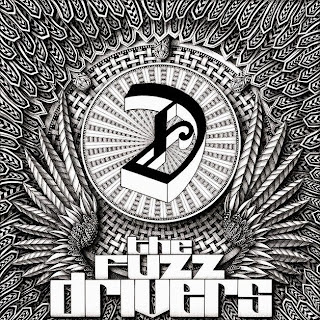 Holy crap! Let me catch my breath for a minute because I was just run over by a two-mile long freight train. And this was no ordinary freight train either. Coming straight out of Portugal, the engine known as The Fuzz Drivers absolutely steam rolls me with their self-titled self-released debut. From the first second to the last they take no prisoners with their super heavy 70's and 80's rock. There is a huge retro thing going on within all genres under the sun I believe and a big chunk of that falls flat because the bands try too hard to time travel back to those decades. However, some bands know how to blend the old with the new and create greatness...and The Fuzz Drivers is such a band. From the word go they unleash their heavy-ass riff-laden music on me and I can't stop marvelling at the full, rich and super crisp production and more importantly the musical talent within the band...which is a rare thing these days.

Opening track Discordia Song gets this freight train rolling but it's not a slow start like with any other train. Instead The Fuzz Drivers explodes and takes off at 200mph delivering fresh, vibrant, excellent rock with loud guitars, heart-stopping thumping bass guitars and punishing drums. Marcelo Vieira crowns it all with one of the best voices I've heard in probably 15 years. Amazingly good! Shine and Eats Me Up continues in the same vein although the band actually picks up the pace even further. The songs starts off a bit slow but eventually the band throws down the gauntlet and they simply crush. Don't know under what rock these guys have been hiding because Sérgio not only riffs like a beast, his solos are spell binding! João Lopes' four-string slinging is the heartbeat of their music and Duarte Carvalho swings the sticks and pounds the drums relentlessly bringing it all together. And I am amazed that they all have been an unknown entity until now.

One of my favourite tracks Carved Time begins slowly with Marcelo's singing being absolutely beautiful. When the choruses kick in they step it up a little and crushes before slowing down again. Check out drummer Duarte's excellent work at the keyboard. Not only is he a very good drummer, he handles the ivories with ease. Mama Told You is kind of the same in the build up although it almost resembles the shuffle and dance rock of the early 70's while a dollop of Bad Company is apparent in parts. Good stuff indeed. Seductive and mesmerizing is all I can say about Into The Sun. João has a very cool bass line going throughout the song allowing his freight train of a band to simply nail it.

Along with the already mentioned Carved In Time, The Poet And The Thief is the best song on the album. The band is totally relentless, steam rolling ahead stopping for no one. This is as good as it's going to get waveriders because to me this songs incorporates everything that The Fuzz Drivers are. It has bits and pieces of the other 8 songs yet it is extremely coherent, heavy, fast and absolutely amazing! 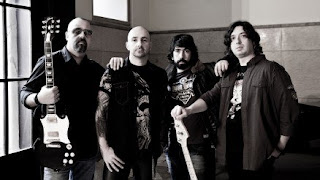 Until It Bleeds and White Lies ends their debut and it is a grand finale. The pace has been slowed down from the onslaught of The Poet And The Thief but only a tad. Sergio leads the train to the end of the line with a mind-boggling riff fest and the band follows suit. They simply demolish with ease and they seem to have so much fun doing this. Keep on listening even when White Lies seem to be over because eventually Marcelo and Duarte returns for a short vocal-piano rendition of the chorus from The Poet And The Thief. It is totally different from the full version but still amazing. Great ending indeed.

This is how The Fuzz Drivers pans out. 9 amazing tracks are delivered with enough oomph to shatter mountains into tiny pebbles. And the amalgamtion of 70's and 80's classic rock with a touch of led-heavy AOR is a godsend especially with the musical talent on display. All band members are fantastically good at what they are doing and the outcome of their efforts is top notch. If nothing out of the ordinary happens this one will end up on my Top 10 of 2013.

It is extremely rare these days to find an album that delivers throughout every single track. Even if bands keeps the number of songs down there always seem to be filler material included. The Fuzz Drivers, on the other hand, belong to that small percentage of bands that delivers quality only and I do hope they continue along that path and don't stray. I can't believe this band is still unsigned because that is a criminal offense....so labels out there, get moving! These guys deserve world domination.