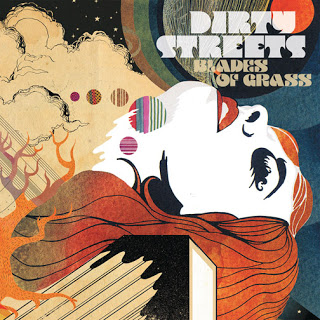 Maaan, I’ve been on this big fuzzy 70’s rock kick all of my life, but these last few weeks in particular.  I’ve been hitting up Leslie West’s first two records and the early ZZ Top stuff pretty hard core.  I don’t know what prompted it.  Maybe I just needed to get my boogie on.  That’s probably it.  I mean, have you heard “Never In My Life” off of Climbing!?  That shit jams.  After coming around on Cactus, finally, I’m left to wonder when the big doom rut of 2013 will be toppled in favor of some good ol’ fun in the sun rock and roll.

Granted, there has been plenty of bands to take up the retro distorted blues boogie style and effectively at that. It’s gonna take someone with some chops and serious soul to fly one over the fence with the jaded retro-stoner crowd.  Enter Memphis, TN’s own The Dirty Streets.  Released July 6 on Alive Naturalsound Records, Blades of Grass has the mojo to do just that.  Move over boring druggy riffs,  It’s time for some serious, greasy-as-fuck, southern rock and soul.

FIrst off, Blades of Grass was recorded at the legendary Ardent Studios, conveniently located in their home town.  Ardent has recorded everyone from Led Zeppelin to The White Stripes to Marty Stuart,  It was Stax Record’s go-to studio when they were overbooked and another Memphis native, film director Craig Brewer, utilized the facilities to record the score for Hustle and Flow and Black Snake Moan most in part due to the fact.  Not just anybody gets to record in their studios.  I find it pretty impressive that The Dirty Streets got to get their hometown rock onto tape there.  The audio on this record is spectacular.  In fact, it kind of sparkles a little bit.

Blades of Grass is an all round solid rock and roll record.  Period.  No confusing it.  Rock music at its best.  It’s in the same league but slightly more ambitious than Mount Carmel, but with a cleaner sound (thanks, no doubt, to Ardent).  Somethings say modern, some things say vintage.  Definitely retro, but more appropriately...timeless.  You’ve heard it before but can’t put your finger on it...that’s how you know when someone is doing it right. For instance, the opening track, “Stay Thirsty”, could easily have been a lost track from The Black Crowe’s Amorica sessions.  However, once you’ve heard The Dirty Streets, you won’t make that mistake.   It’s easy for the band, especially under the heavy rock footed thunderfunk drumming of Andrew Denham, to lay down a thick cut groove that, in a very general manner of speaking, is reminiscent of Carmen Appice jamming with John Fogerty and Sly Stone.  I think it is fair to say that these boys got their fair share of deep south groove straight from the source.

I don’t like making predictions.  The second I get cocky about ANYTHING is when it falls apart.  So their sake, I won’t heap more praise than they deserve, but The Dirty Streets have a few things really going for them.  They are on a great label (Alive helped spawn the now behemoth Black Keys), they have a superb sounding record, and they have more rock and roll vibe oozing from their pores than someone their age should.  Blades of Grass is %100 bullshit free.  I only had slightly more fun listening to Side 2 than side 1 and that isn’t saying anything.  Blades of Grass is one of the strongest rock releases of the year, no doubt, and has the potential to go mainstream amongst the figuratively hip v-neck wearing listener.  But really...who cares.  This record stands up front to back.  If The Dirty Streets can raise their game in anyway, which would be a tough feat, before their next record, they undoubtedly be a force to be reckoned with beyond the underground.