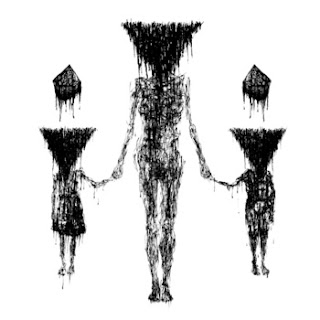 This one man band from San Diego, California plays industrial doom, and this is his fifth and latest creation of audio terror. This isn't the usual keyboard and sampler based industrial, instead Tristan Shone uses “custom fabricated machines/controllers and speakers” that he invents to create his music.

"Women & Children" opens with what sounds like standing outside in a field and a pulsing bass tone layered over top, then some piston noises and electronic drumming comes in. Sounds continue to be added until Shone's indistinguishable vocals start, mixed in low behind all the other elements. It sounds like you are now outside of a steel factory and listening to the sounds from within. "In Remorse" has cleaner vocals and although being very noisy, is actually very melodic in its way and is more like older industrial music that you would hear in clubs. "Melee" is a very cool mixture of layers of sound that morphs as the track progresses and takes on new textures. "Tame as a Lion" is a very nice mellow song that reminds me on NIN's "Something I Can Never Have".

The album is very experimental and has so much going on that it takes a few listens to take everything in and by that time...you're hooked! The heaviness of the music takes you into a dark world that seems like you're falling into the abyss and it's a trip that you don’t want to leave.

"Fearce" is a slow crawl through the march of the cyborgs while someone screams in the distance and the thudding marching is hypnotic and captivates you. "Miles From Home" is a very sparse song with miles of space in the atmospheric track, and it could be part of a science fiction soundtrack. "Pain Myself" closes out the album with a very quiet track that has intense parts that come up to assault you and then fade away again and is one intense and mind-blowing song.

This is a very intriguing album that at first may be off-putting, but it just keeps growing on you and has so much going on that it just is a strange and beautiful experience to listen to. Yes, this has the earmarks of NIN and SKINNY PUPPY, but it takes those flavors and adds its own spice and makes for a delicious taste that you keep wanting more of.