A Ripple Conversation with The House Harkonnen part I.

A couple of years ago I reported on the activities of an organized, secretive group called The House Harkonnen.  This was a group who challenged the legitimacy of the dictatorial ruling party and who presented themselves as a force to be reckoned with thanks to their auditory manifesto; Volume VI.  Alas, the majority of the public was not ready for revolution and The House Harkonnen was forced underground.  Although out of the public eye the group became something of a figurehead for the resistance movement.  Their HK emblem appeared with increasing frequency in bars and clubs throughout this nation.  But then suddenly, they vanished.  Time passed, but The House’s powerful influence lived on.

Out of the blue I was contacted by someone representing the House who asked me whether I might be interested in meeting up with the group’s leaders at an undisclosed location to discuss their recent history.  Of course I said yes and a few days later I received a call giving me directions to the meet.  Shortly after noon I found myself waiting in front of a normal looking suburban home situated outside of Dallas, Texas.  You couldn’t ask for a better day.  It was sunny without a cloud in the sky and the temperature was balmy.  I didn’t have to wait long before vehicles pulled up in front of the home and five disparate looking men got out.

The first two men arrived in a Suburban.  One was wearing the uniform of what appeared to be a lawn service, and the other had on a vintage black Adidas jumpsuit.  Next came a muttenchopped individual wearing a frayed shirt that stated “Lemmy Is God” and blue jeans.  The fourth guy was wearing some country-western getup, and the last guy looked the part of a carpenter as he wore sawdust covered overalls.  Unsure of just who these men were I asked whether or not they knew about, or were friends of The House Harkonnen.  To my surprise they laughed in unison and informed me that I was speaking to the beating heart of The House Harkonnen directly that very moment.  It was explained that in order to walk about undetected by Big Brother they, the core members of the House, had to camouflage themselves.  Introductions were made.

Andy, the drummer, was the one in the lawn care getup.  Dave, the bass player, wore the funky fresh Adidas jumpsuit.  Doty, one of the guitar players, had on the “Lemmy is God” shirt.  Alex, lead singer and guitarist, was the one who looked torn from the pages of an Old West novel.  Last but not least was the carpenter.  He turned out to be Jim King, the producer and official fifth member of the band, and the home we stood outside was his.  Stepping through the front door I discovered its true purpose.  In the place of a normally furnished dwelling I found a fully featured recording studio.  Brilliant!  The House Harkonnen operated right under the noses of the authorities and no one was the wiser!


To make a long story short, after we shot the breeze for a bit we got down to the business at hand.  I delved deep with my inquiries into the group’s past and present and they were incredibly forthcoming with their answers.  Understandably the House’s outlaw status made the five men nervous about being recorded in any way so what follows are the questions I asked of them and my recollections of their answers. 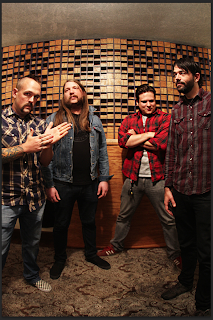 How does your song writing process progress?  What comes first; the overall idea, a riff, the lyrics?

The riff comes first.  Always.  House Harkonnen (HK) songs are built from riffs.  The best ideas are pieced together to create the most righteous songs possible.  Vocal melodies are created after the song has been mostly put together.  Lyrics are the last aspect to be finished.

Why did you decide to describe your sound as ‘Slop Rock’?

Many years ago a member of another band told Alex’s brother, then playing bass for HK, that they played ‘slop rock’.  It stuck.

What is your musical intention?

A great song is one that conveys honest emotion to the listener.  When someone is moved by what they are hearing, that is a great song.


The long stretches of time between releases are not planned.  The main reason it takes a great deal of time for HK to release a new project is that the group is made up of endlessly creative perfectionists.  The music has to be just right before they are willing to let it be released.  Unfortunately, that means that many of the songs that HK create will not measure up to their high standards and will thus be thrown away.


During the early summer months of 2012 HK decided that the time was right to get back in the studio.  At the outset of the recording process they set up a record release show months down the line, believing that they would have plenty of time to finish what would become Beastmode.  Unfortunately one thing led to another (remember…perfectionists) and HK literally worked on the album right up until a couple of hours before the concert marking its release.  The 100 limited edition CDs were burned around the time the doors to the club hosting the shindig opened, and they were delivered slightly before HK took the stage.


After everything was said and done, all five members of HK were unhappy with Beastmode.  It was quickly decided that Beastmode would be treated as a ‘pre-production’ of their next real release, appropriately titled Volume VII.  Work began immediately, and I am very happy to report that the finishing touches are being completed as you read this.
Posted by The Ripple Effect at 12:30 AM