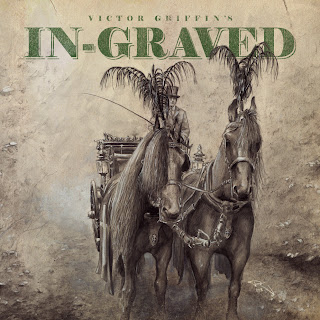 After leaving the current incarnation of Pentagram legendary six-stringer Victor Griffin emerges with a brand new band called Victor Griffin's In-Graved. And it's a wise decision if you ask me because this new venture is on fire to say the least. Since Victor is being Victor, meaning a great guitar player and song writer, there are traces of his other band Place Of Skulls in some of the new songs which is only natural but the best thing is that everyone involved in recording this beast are playing at the top of their game and they seemed to have a blast doing so.

Building the band around himself, drummer Minnesota Pete Campbell and Jeff"Oly"Olson on keyboards Victor has brought in a lot of friends to help out. Ron Holzner(Trouble and Earthen Grave) and Guy Pinhas(The Obsessed and Goatsnake) on bass and Mike Puleo(Orodruin) on keyboards being the most notable guests. Being the guitarist extraordinaire that he is Victor has made a modern-sounding 70's heavy rock album that actually puts a lot of focus on the Hammond organ. Fret not diehards because there are plenty of bone rattling riffs on here to satisfy your needs alright.

When such a high profile artist releases an album, whether it's with a new band or his current band, anticipation runs high. In the case of Victor Griffin's In-Graved those anticipations are unfounded and surpassed by a mile and a half. During it's running time of 40:44 minutes the music flows with such ease, elegance and joy. Although the songs touch upon social commentary(Digital Critic), doubt(Thorn In The Flesh) and narrow-mindedness(Love Song For The Dying) the album radiates hope. There's so much soul and life in each of the songs which makes blistering solos even better, a wailing organ more vibrant and the thumping, punishing rhythm section even heavier. Fantastic!

One of my favourite tracks is Fading Flower which deviates from the norm in the sense that it reminds me so much of Scottish rockers The Almighty, especially that band's singer Ricky Warwick's voice. Don't know if it's intentional on Victor's part but it could have been found on any of the earlier releases of that band. Regardless, it is a very, very good song.

Also In-Graved performs a rousing rendition of Jethro Tull's Teacher and here they show any band how to do a cover. You clearly hear that it is a Tull song but the band has put their own stamp on it. What I mean is it's not identical-sounding version which usually ends up with no soul at all. In-Graved's take on it is the exact opposite oozing feelings and heart.

Late For An Early Grave speaks directly to me as I'm sure it does to a lot of people out there. The title alone says it all in the way we live our lives as teenagers and young adults. We feel immortal and indestructible and won't listen to anyone but pretty soon that all comes crashing down. An excellent song.

You can't ask for a better start to your band's career as Victor Griffin's In-Graved oozes class. At the same time it raises the bar for them whenever it's time to record the follow up but who can complain? Any band would want that kind of incentive. In the meantime you should all go out and get a copy and let this amazing band take you on a great journey. So listen, absorb and embrace it....because this is truly an amazing release.