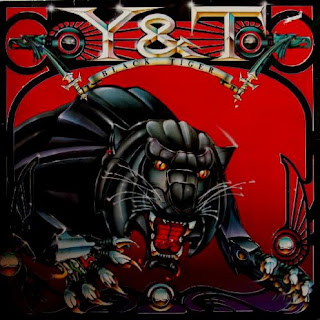 Alright, let's head down memory lane shall we? In fact, we're going to the year of our lord 1982 when yours truly was a wee lad of only 11 and had just discovered a true classic album by a severely underrated yet pretty damned good band. The album is Black Tiger and the band is Y&T who are still going strong. So sit back and indulge an old man the privilege to ramble on about days gone by.

Back in 1982 I bought a sampler cassette from CBS Scandinavia containing their metal releases for that year. There were a couple of tracks from Judas Priest's excellent Screaming For Vengeance; Frank Marino And Mahogany Rush, 220 Volt and Viva, a German band featuring Barbara Schenker, Michael and Rudolf's sister are on there amongst other bands. Last but definitely not least there was the songs Black Tiger and Hell Or High Water by Y&T. Since they were signed to A&M I guess CBS Scandinavia had the distribution rights. Anyway, Judas Priest of course got me hooked but Y&T affected me even more. So naturally their album had to be purchased somehow which it duly was.

Starting off with the instrumental piece From The Moon it quickly leads into the quickfire assault of Open Fire. This heavy rocker lays down the law and shows what's in store. This is a great song and the perfect choice to start an album with Leonard Haze's drumming especially his single kick drum-pedal work being top notch. Don't Wanna Lose You follows and is a rocker too but the tempo is brought down slightly. The late great Phil Kennemore has something wicked going on with his 4-string axe here. His sound is solid and distinct and takes the song to great heights. Hell Or High Water is slow heavy and shockful of riffs telling the tale of not mistreating anyone for any kind of reason. Dave Meniketti's solo takes a great song to even higher levels. Next up is the fantastic Forever where Meniketti and Joey Alves are trading riffs and licks back and forth like there's no tomorrow. There's a break almost 3 minutes into the song where they shred their axes to pieces kicking the song into even higher gears. And again Meniketti's soloing is beyond this world. 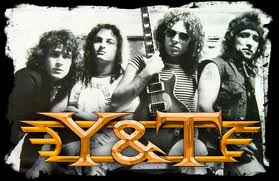 The title track, Black Tiger, follows suit starting off with a gradually increasing riff to a background of jungle sounds before the band switch gears and blow the roof off. Again they bring another stomping rocker to the table which of course plays a big part in making this album so good.
Not letting off the gas Barroom Boogie is musically a corker although the lyrics might be a tad asinine for some by today's political correctness. But screw that y'all Black Tiger came out in 1982 and it is what it is. Hey we've all had crazy times at the bars...

My Way Or The Highway slows it down a little bit but the rhythm section of Kennemore and Haze still keeps it heavy and groovy. The rattle and shake of this song leads into my favourite Y&T track ever...Winds Of Change. Already when I heard this one back in pre-historic times it struck a chord with me and I still get chills listening to it. When Y&T visited Sweden for the first time ever in 2004 and they appeared at the main stage at Sweden Rock Festival, Winds Of Change just rocked my world in every possible way. The simple fact that they were on Swedish soil was amazing and the crowd was going nuts but when they began to play this song 10,000+ visitors sang for Dave he almost lost his composure...it was magical!

This is an album that definitely has stood the test of time any way you look at it. The production is top class, the playing is even better making it a release that is still relevant. Jumping between the years frontman and sole member left from this line up, Dave Meniketti still sings magnificiently and his guitar playing is beyond words. Not many are blessed with a great voice and guitar hero tendencies but that's Dave for you. I have no idea what ever happened to guitar player Joey Alves but Phil Kennemore stay with Dave until his untimely death a few years ago. Leonard Haze left the band in 1986 although he returned in 2001 and played in Sweden 2004 and he sounded great. However his demons from the past caught up with him and he left the band a second time in 2006.

If you for some reason have never heard of Y&T Black Tiger is the album to start out with. This is everything the band has been past and present but do not stop here though. Check out Yesterday & Today, Struck Down, Earthshaker, Mean Streak and In Rock We Trust. These, including Black Tiger are essential albums in any rock collection so go out and get them.