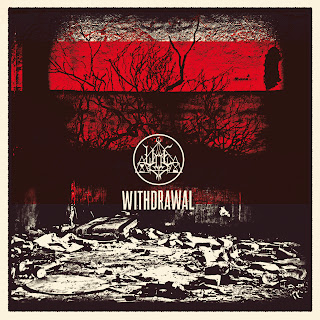 Woah.  I try not to read press releases, I try to listen to these albums as they come to me with as few preconceived notions as possible.  I had heard of this band and heard some good things about this release.  But I guess because of the name of the band I was expecting something really slow and sludgy and doomy.  Wrong!!

This is black metal of the fire breathing variety.  The album opens up firing on all cylinders from the first second of the first song.  And this is an engine that has about 32 cylinders.  There are some death flourishes, and a song or two edges along the black and roll style that you hear from Darkthrone these days.  Buy yeah, if you like black metal that grabs you by the balls and drags you along for one hell of a ride, this is your shit right here.

Woe started out in that fine black metal tradition of the one man band.  The first release was well received, necessitating that a band be put together for live performances, and they have been a band since.  “Withdrawal” is their 3rd release and the first that was written and performed as a full band.

There is a lot of good music here.  Chris Grigg, the man behind the band, knows how to put together some killer riffs and songs.  I'd love to have a lyric sheet to know what the songs are really about, because even though I listen to a ton of metal and can decipher most of the grunts and growls I hear, these are incoherent to me.  But the music is awesome and pummeling and certain sets a mood.  A mood like, “let's go rip shit up”, or “hey, that church has been around long enough, let's burn it down”.  There are plenty of nods to old school black metal but at the same time there are a lot of good fresh ideas on display.

I think the coolest thing to me is that this is an American band, but if you didn't know that you would think they hail from the land of the Vikings.  A lot of this music sounds like it was written as the soundtrack to a raid, when the longboats were pulling up to the shore and a boat load of berserkers jumped out to wreak havoc on your pitiful village.  “Carried By Waves To Remorseless Shores” is an awesome example of this and the song title even fits.  I thoroughly enjoyed “All Bridges Burned” and “Ceaseless Jaws” as well.  Those are my favorites but all of the tracks on offer here are good, good stuff.

This is black metal that doesn't stray too far from the path and too far away from what you would expect when you hear “black metal”.  There is some very tasty guitar playing, though, that you don't usually find in this genre.  There is also some nice variety in the vocal approaches, almost making me think that a couple different folks had their hand with the vocals.  If you need some black metal that mixes things up a bit but is still traditional enough that you won't wonder what the hell you are listening to, Woe just might be your jam for the summer of 2013.