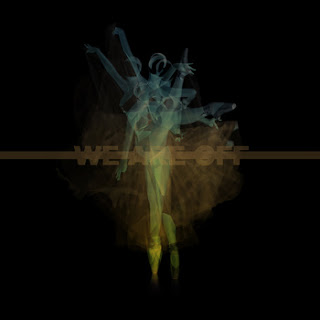 Becoming a teenager in the early 1980s was a cool time, lots of different styles of music on the radio, if you lived in or near a large city, and luckily I did. That helped to influence and shapes my tastes that still hold to this day. New wave, I love it.

WEAREOFF bring me right back to the days of my youth with their take on new wave that has none of the cheesiness and insipidness that a lot of people think of when they think of new wave. This band plays the early style of music that reminds me of Danse Society and the early gothic / synth styles that had a lot of texture and emotion.  The ability to play that style and make it sound fresh and interesting and not a copy of that style is a very hard thing to do and they pull it off masterfully.

The songs flow together to become a cohesive whole that get a smile on my face as soon as I put the first song on, and carried it right to the end of the album. The songs have the emotion and atmospherics that drew me in and swirled around me, taking me back to the good times that I had way back when I was younger and made me wonder why more bands don’t play this style anymore, then it hit me, most turn it into parody or a cheap imitation of a certain band and don’t put their own touch into their music, these guys do.

The songs range from faster and dancey to slower and more melancholic, but they all have one thing in common, a sense of love and excitement that pushes the songs into the realm of great. The band takes the new wave sound and gives it the push that makes it sound interesting and new again. The gothic type new wave stays on the more new wave side and doesn’t have much to do with modern gothic music and for that I’m glad, no morose, obtuse lyrics and no pretentions either. Every song on this album was a winner and there isn’t one that I could recommend more than another, that’s the sign of a great album.

I’m so thankful that I got a chance to hear this band from Hamburg, Germany, and now I’ve got a new favorite band because of this album. Take a chance, give it a listen and enjoy ten songs that just get better with each listen.