We All Want To - Sally Can't See 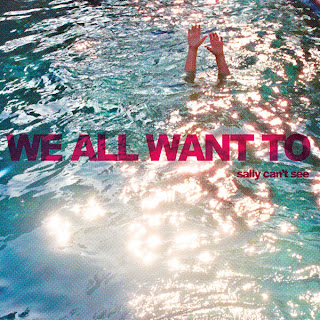 Really, I had no idea what to expect.

Hanging out in Brisbane, Australia before a good friend's wedding (cheers Mat) we were invited to a show by local indie rockers, We All Want To.  Now, Joe, who invited us, has great musical taste, and I have full faith in his management company (Alien Lane) that also represents Ripple favorites, Grand Atlantic -- but this wasn't a typical show.  This performance, called "Take the Lead" and performed at the Judith Wright Performance Center (not a grimy, beer-splattered pub), found a sold-out theater celebrating with the band the release of their latest album, Come Up Invisible.  But here's the twist; joining the band on each of the 18 songs was a guest vocalist from somewhere within the pantheon of the Indy Aussie rock scene; reinterpreting the songs or re-imagining them in one form or another.

Really, I had no idea what to expect.

Nor, could I ever have imagined what I received.  Playing their hearts out before an adoring audience, We All Want To delivered a rousing, sometimes gentle, sometimes pummeling, performance of mood and atmosphere, melody and craft. It was a stunning triumph for the music and an ordained testament to the strength of the musicians and the songs.  Joining band members, Tim Steward, Skye Staniford, Dan McNaulty, Melissa Fraser and Darek Mudge (plus guest keyboardist Morgan Hahn from Grand Atlantic on the Wurlitzer) were an array of diverse singers such as Danny Widdicombe (The Wilson Pickers), Sue Ray, Jeremy Neale (Velociraptor) Dom Miller (The Rocketsmiths), Chris Dale, and Seja Vogel (Regurgitator), amongst others.  Some of the performances were charmingly sloppy, some exhilarating, some riveting (such as spoken word poet Ghostboy's beatnik rendition of "Ramp Up the Bleeding") and some simply brilliant and moving - most notably Helen Franzmann's haunting performance of "Japan."

Never having heard any of these songs before, I was entranced.  Tim Steward created a gravitational field of charisma around him, strumming with abandon and passion; a being in perpetual motion.  Skye's vocals lilted in from some celestial heaven as the perfect compliment while Melissa, either lending her voice or swaying on the bass, was simply captivating.  Darek filled the space with tasty fills and bending leads while Dan triumphed behind the skins, most notably when he performed the entirety of "Japan" with mallets on the snare and floor tom.  As the show roared to a conclusion behind the rousing, full-ensemble encore of "Streets of Your Town," by the legendary Brisbane band The Go-Between's, I was standing in full-appreciative amazement with the rest of the crowd -- enthralled by the performers, enraptured by the band, cocooned in their warmth, in love with the songs.

But one nagging question remained.  How could an indie band, with only a couple of albums to their credit, pull off such a show?  How do 18 "guest-vocalists" simply find time in their hectic lives, sacrificing a Friday night, to lend their talents to re-interpreting songs that couldn't yet be considered classics?  That seemed like an honor reserved for the Kinks or Stones or at the very least Aussie legends like The Church or the fore-mentioned Go-Betweens.  At the after party in the pub up the street, I asked that question to many, and the answer was simple and unanimous.

Having previously led the underground, post-grunge punk rockers, Screamfeeder, Tim is adored in the Brisbane music scene.   And his songwriting is so respected, that all he had to do was place a few phone calls and the response from his fellow Aussie musicians was emphatic. They jumped at the chance to sing his songs. As Morgan Hahn put it after the show, "The songs seem so simple, then as you get into them you really realize the genius of the craft."  Having heard them performed in this manner, I can attest to that. 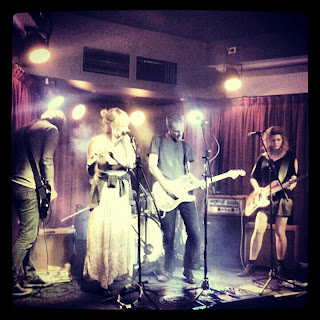 All of which brings us to "Sally Can't See," the debut American release from We All Want To, a rapturous slice of indy rock.  Although, it's a lazy comparison, the closest band I can compare We All Want To, is Brisbane's own, The Go-Betweens. They both ply a quasi-acoustic vibe and relaxed song-writing and harmonies of male and female vocals.  But they're The Go-Betweens with an edge. Perhaps this comes from Tim's work with Screamfeeder, but We All Want To isn't afraid to mess things up. Spontaneity and unpredictability always lie underneath the surface, never tilting its hand as to when a song may erupt into a cacophony of dissonance or punky aggression.  Beautiful melodies aren't afraid to crash into walls of sound. And it all works.

Comprised of songs from the band's prior Australian releases, the album is nearly a greatest hits introduction.  "Back to the Car," is one standout track with its light-floating harmonies and melody. Tim's vocal style and phrasing here remind me of fellow Australian, Paul Kelly, and when Skye joins in, their voices blend perfectly, lifting the song to the addictive.  And then there's the still hauntingly beautiful, "Japan."  Against a seemingly simple lyric, Tim reveals a song of love and comfort as he calms the fears of a loved one about his leaving for another tour.  Amidst a gorgeous refrain, he sings of his impending return home.  How the the stamps in his passport show "as many come backs as going aways."  A moment of love so simply and effectively captured.

Already racing up the indy charts in the US, Sally Can't See is a perfect a welcome hello to a band already adored in their hometown, and soon, no doubt, to be adored everywhere.   Keep your eyes and ears open for them, they'll definitely be a band to watch.