I first got to know about these Houston-hoodlums via Ben Yaker, Sanctus Bellum's affable bass player and photographer extraordinaire. We ran into each other at Days Of The Doomed I in Kenosha, WI in 2011. He gave me a copy of their self-released debut Return To Dust and I played it to dust and beyond on the way home from the fest. The following year, 2012, the band actually played at Days Of The Doomed II and they absolutely crushed it. To make things even better, they had their brand new self-released sophmore album The Shining Path available. Good stuff indeed folks. Having ended up playing both discs back to back on numerous occasions I felt that writing about only one of them wouldn't do. There's a strong connection between them prompting me to do my first twoferone...feature two releases in one review. So indulge a self-professed dingbat this pilot project about a damned great Texas band. 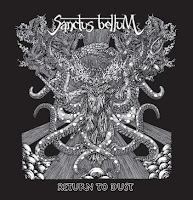 Shoggoth's Ascent initiates Return To Dust with a slow creepy bass line, followed by real doomy drumming before the guitar joins in and the band brings up the speed to mosh pit frenzy, even when Justin Waggoner starts to sing they keep it this way. About halfway in they slow it down to dreamy doom levels allowing guitarist Jan Kimmel excel with a beautiful solo. The songs ends with a bang and Dagon's Bride takes over. It has more classic metal undertones with a pinch of doom although Waggoner's singing is more akin to punk and Mark Lanegan. And like a bottomless treasure chest Sanctus Bellum pulls gem after gem of pure excellence from it. Oozing class their fantastic debut continues with Curwen. It starts almost trippy and oriental before picking up pace although it weaves back and forth between faster and slower parts. It ends real heavy...

God's Own Warrior follows and is kind of mid-tempo where Jan takes the centre stage with some fantastic guitar playing. Although the song never really veers out of tempo it somehow builds up and seem faster at the end. Don't know how they created it, maybe it's Ben's deep thundering bass guitar and Cory Cousins' varied and earthshattering drumming I don't know. What I do know is they created something amazing here. Waving their magic wand The Reddening West ups the ante even more. A little faster it just keeps pummeling me in it's kind of Maidenesque structure. White Cat brings on more psychedelic undertones than the other songs in all it's doomishness. Since it's a fast track that combination is to me totally unheard of and very refreshing to hear. 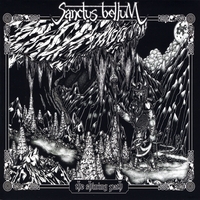 The title track sets off the proceedings and it is creepy initially, almost trippy before kicking into heavier gear. Halfway through it's good ole heavy metal where guitarist Jan Kimmel and newcomer Maurice Eggenschwiler are shredding like there's no tomorrow trading licks left, right and centre. An excellent opener that really puts pressure on the band to deliver throughout. Spiral Jacobs follows and although it slows things down a tad it is fantastic. Like The Shining Path it starts off kind of psychedelic courtesy mainly of the rhythm section who in their solidness allows the two guitarists to jam, solo and riff back and forth, basically they know they can let loose and do whatever. I have spoken of this before but when a band is as confident and talented as Sanctus Bellum are whatever they do will come out great. Vessel is a heavy metal riff-o-rama of the highest level. Still keeping it kind of at mid-tempo they do hit bulldozing mode and I love it! While Jan and Maurice are riffing their fingers to bloody pulps Ben's thumping bass shatters my head while Cory pounds my remains to dust. And what can I say about Justin's voice? Nothing apart from amazing...this is a great great song.

Dumb Luck Divinity I believe is the song on The Shining Path that actually represent all the songs on the album. What I mean is that it has parts of each track in it making Sanctus Bellum what they really are. A fantastic musical beast! Bringing up the pace a little bit Beautiful Swimmers is their most straight up metal track on this release. Driving hard the band ripps it up making me headbang my already messed up neck to pieces. Ending with Ephaniah is a great choice. Starting out as an awesome doom song, again kind of trippy, halfway through they switch to piledriving me with full force heavy metal á la Maiden making that poor suffering neck of mine take another beating. Reverting back to a slower pace the song and the album eventually ends leaving me yearning for more.

In the beginning I said there's a strong connection between the two albums. First and foremost they are like chapters of a novel. Return To Dust is obviously chapter 1 opening up the storytelling for the listener, sending us on the way. The Shining Path continues the narrative but is tweaking it a little bit more. What appeals to me, apart from the fantastic songs and the excellent playing, is the fact that even though played back to back both albums have the same sound. But Sanctus Bellum has managed to step it up on The Shining Path making sure it's not a repetition but a natural continuation and that's excellence dear waveriders.
Embrace this band because their take on doom and classic heavy metal is fresh, honest and absolutely amazing! They have taken all their influences and all their own ideas, stirred them around in a crock pot and let it simmer for a few years. Once cooked to perfection they unleashed it on the public and it is delicious. To quote my good friend Mercyful Mike, he said they have created a new sub-genre "shred doom" and I think that's very fitting. Go the band's website and order both albums and you'll get to taste this Texan stew of el grande metal and doom. Served best with beer while headbanging and thrashing madly!