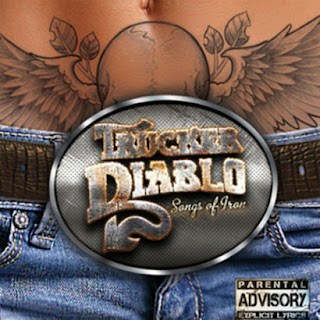 Trucker Diablo is an honest, raw, pounding juggernaut of pure rock power. If you're not listening to them loud then you need to. Simply put, one of the freshest and interesting sounds to come my way in a while. They deliver a sounds cape that harkens to hard rocks glory days and yet they have a signature modern rock edge to their sound.  Ferocious riffs and screaming guitar leads propel perfect beer drenched vocals all across this disc.

I pulled out of my driveway and  hit the road. The first blaring sounds screamed out of my car windows, disturbing the silence around me. It is loud, it is intense and it is good. The production is crisp, clean and clear. Trucker Diablo has captured a raw intensity and poured their heart and soul into the creation of this album.

14 songs of pure hard rock flown in on a fighter jet from Northern Ireland. This is rock and roll.
Tracks "Red Light on", "Year Of The Truck" are beer drinking anthems that hit you over the head like a brick. Catchy and full of hooks these songs are a lesson in rock sensibility.

" The Rebel", And "drive" easily two of the best songs on the album. Trucker Diablo delivers on every note.

"Not so superstar" The sound they are looking for. This is the core of the album. I like this one. " I don't need a watch to tell me what time it is"... I like that this band can rock hard and yet throw in just enough humor to reveal a humble side. This song kicks ass...Great guitar solo.

"Lie to me" is another killer track. Incredible lead on this one. catchy. I'm playing this one again. And again.
" Maybe your the one" great ballad. moves into that classic power chord lift. crunchy and melodic. Must get this one on some sort of radio rotation or movie soundtrack...this song could be key to breaking them into the mainstream American audience. Guitar lead is perfect. Someone favors the wah pedal for solos. Very Slash like. I'm playing this louder.....awesome.

This album should propel Trucker Diablo into the stratosphere of rock  hierarchy. This an honest, hard working, rock and roll band. They deserve the world stage they are about to own.