Tom Jones – Spirit In the Room 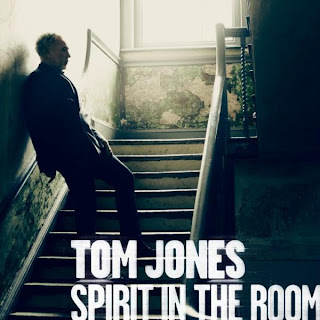 I was never a Tom Jones fan, other than when I feel cheesy and want to hear the hits – What’s New Pussycat (WHOA, WHOA WHOA, WHOA WHOAAAA!!!), Green Green Grass of Home, She’s a Lady, It’s Not Unusual (Carlton dance!), etc.

BUT THIS…. THIS IS NOT THE TOM JONES YOU KNOW!!

This is Tom’s 40th studio album! The second with producer Ethan Johns. This album is very much like the previous one with Johns – Praise & Blame (2010). Where P&B was made up of mostly little known devotional and gospel covers, and critically acclaimed, ‘Sprit..’ is a collection of covers from many of the greatest writers of folk, blues, pop and eclectic music of our time.

The album starts off with Leonard Cohen’s Tower of Song. Befittingly, it tells us that Tom has accepted and celebrates aging. This album, seems to tell the story of his growing maturity. Leaving that “sex-symbol”, hip-gyrating self behind. Sure, these are covers. But he and Johns have decidedly taken these songs and created a story for Tom’s golden years, much like Rick Rubin did with Johnny Cash on the American recordings (and we all know how great THOSE are!).

Bad as Me, Tom Waits and Kathleen Brennan’s song, is STEEPED in Waits’ gypsy jangle of his 80s an 90s recordings. Tom KILLS it, on his version (meaning  AWESOME)!

Traveling Shoes is the one NEW song. Not a cover. Written by Johns with help from Jones, this is a song that, I believe, stands up with all of the other tracks on this album! That says a lot, when you consider what songwriters are featured here!

Songs from Bob Dylan, Richard Thompson, Joe Henry, Paul McCartney, Blind Willie Johnson and more, make ‘Spirit…’ an album that will grab you. Having Ethan Johns producing like T-bone Burnette, will entrance you.

Having Tom Jones in your ears has NEVER been so blissfully wonderful.

Would not have expected this. Gonna give the album a listen.