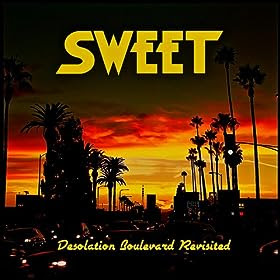 You'll never find an argument  between me and Woody when it comes to The Sweet.  Somehow in the annals of classic rock they remain criminally under-rated and just don't get the acclaim they deserve for being masters of heavy glam rock.  Probably because their accomplishments get filtered through the lens of their bubblegum pop origins and the fact that they were mouthpieces for the chipper songs of Chin and Chapman, like "Little Willy."

And none of those facts can be denied.  They started off like a U.K. Monkees, making hits on other writer's song.  Only these Sweet Monkees were maximally glammed and sugared out.  I'm not  a big fan of their early bubblegum, but as they grew, they rebelled against their producers and took control of their own songwriting, and in the process became one helluva kickass band.  Desolation Boulevard is the album where this stunning transition first materialized with the band claiming the writing reigns on many songs, and it's probably the most well-known album in the band's catalog.  Not the best in my thoughts mind you, but the most classic.

So, it's only fitting that the band revisit this historic document in their career and plow through the entire thing in the live setting.   Only one of the original members, Andy Scott remains, after the passing of Brian Connolly and Mick Tucker.  But it still works.  Sweet was always identified by the razor-edge vocals of Connolly and the distinctly heavy guitar tone of Scott, so aided by Tony O'Hora (guitars, keys, vocals) and Bruce Brisland on drums, Scott's Sweet took the stage that night in front of an appreciative audience, joined by Pete Lincoln on vocals. And by all accounts, the night was a rousing success.  I wish I'd been there.  The band sounds tighter than many of the bootlegs I'd heard of them back in the day, and those epic Sweet vocal harmonies were still perfectly etched in stone.

Desolation Boulevard was a perfect album for the band to revisit, with it's combination of "old" sugary pop and "new" heavy glam.  I'm no expert, but what we have here is a run through of a hybrid original UK version of Deslolation.  In the US, parts of Desolation Boulevard were combined with songs from Sweet Fanny Adams to make up the US version of DB.  Under that track listing, the first half was all Chinn ad Chapman songs, the second side all Sweet songs.  This seems to have a combination of songs from both versions, but not quite like the UK version or the US versions I have.  Overall, it's the best track list I've heard of these songs.

Kicking off with the classic, proto-glam punk anthem, "Sweet F.A." Sweet immediately shows this is no old man's oldies show.  That classic guitar riff sounds mean and urgent, angry and hostile, looking for a fight.  Pete Lincoln does a solid job replacing Connolly.  Solid enough to carry the show that is.  His voice lacks that roughened edge that made Connolly's so dynamic. I kept wishing for him to push himself just a little bit beyond his vocal comfort zone, let it squeak and break and shred like Connolly used to.  But it's a minor criticism.  There can only ever by one Brian Connolly and Lincoln does himself proud stepping in to fill such big shoes.

"Sweet F.A." is on hell-stomper of a song, riding that galloping riff through stuttering leads and spasmodic breaks.   There's a touch of early UFO in it's construction and lots of that glorious punkier edge that Sweet flirted with. People just don't Sweet enough credit for the proto-punk they were.  Combining sugary bubblegum with frantic guitar put down the foundation that the Ramones would take to the streets.

"Heartbreak Today" plays a descending riff that's surprisingly heavy before dropping into more classic Chin/Chapman-era bubblegum/glam rock.  And damn, listen to those vocal harmonies over the choral break.  So definitive Sweet.  Sure, Queen gets loads of credit for their four-pronged vocal work.  Personally, I prefer Sweet in every way.  The guitar solo and the resurgent riff never let this song wander into bubblegum territory.  In fact, it's amazing how heavy this sugar-coated pop song was.  Definitive glam masterpiece with that juxtaposition of heavy and light.

"The Six Teens" is another song that straddles the line between the older bubblegum and newer heavier rock, and I swear it sounds better here than I ever remember it sounding on the original album.  Desolation Boulevard, to me, was always a mixed bag of an album.  I listened to side two religiously, before I realized it was the side written by the band.  It was heavy and glammy and I loved it.  Side One, was the band's last effort working Chin/Chapman songs and it was hit and miss with me.  I loved the heavier Sweet, not the bubblegum.   But here, songs like "The Six Teens", and "Restless" sound so much fuller and thicker than I remembered.

And speaking of thicker.  Holy crap!  Where did "No You Don't" come from.  I barely remember this song as a filler track on the album, but here it rages out like a rebellious epic.  Dark and slashing, with it's protesting chanting chorus, "No You Don't."   This is teenage angst and the ultimate kiss-off song.  Andy Scott's stab at lead vocals are spitting and angry and urgent.  Sure it's glam but the punk roots are right there underneath the surface. "Into the Night" is a monster of roaring Sweet heaviness, with chugging riffs and darker, more menacing vocals than most give Sweet credit for.  And what a killer riff.  Forget categories and genres, this is just a pure, unadulterated heavy rock song.  If UFO had done this song, folks would talk about it with golden tones.

"Ac-Dc" was Sweet's homage to a love affair with a bisexual woman which was always kinda ordinary for me.  A standard Chin/Chapman chug along fare that sounds like it coulda been Slade.  Not bad, but not special.  No, that word would have to be reserved for the next cut, "Fox on the Run." One of Sweet's biggest hits and the first one they wrote themselves.   Again, what we got here is a perfect combination of Sweet's pop history, as heard on the chorus, mixed with their desire to bust out and rock.  And the audience knows this.  You can hear their energy building as that classic synth intro builds.  Here, I gotta say, I really miss Brian Connolly.  His roughed vocals added that extra layer of juxtaposition between the sugary and the metallic.  Without him, the song loses some of that edge.

But "Set Me Free" makes up for that minor disappointment.  Always one of my favorite tracks on the album, Andy Scott's vocals are as impassioned as ever.  The verses motor along at 100 mph, building to that classic Sweet vocal chorus.  The band is epic here, tight as bankers sphincter and the guitar simply rages.  Start to finish, a total terror.   All of which leads to the ubiquitous "Ballroom Blitz" which sounds as campy and fun as ever.  I coulda done without the "alright fellas, let's go!" intro, which seems just a bit to silly for a band of this age, but they still tear into the song with abandon and have a ball.  And really, what is "Ballroom Blitz," is not fun.

It's often hard to recommend a "revisited" album from an older classic band, particularly if key members are missing.  But as a Sweet fan, I totally dug this from start to finish.  The bubblegum stuff that bothered me in the past was amped and crunchier than I remembered and live renditions of "Set Me Free" "No Yo Don't" and "Sweet F.A." more than make up for the slightly lackluster "Fox on the Run."   Yes, Brian Connolly is missed, but Sweet was always more than Connolly and the band does more than enough to justify their "classic" status.  I do wish there had been more between song banter, as the songs just come one after another, but that's another minor complaint.

If you dig Desolation Boulevard and The Sweet in general, you won't be disappointed.  A strong addition to their cannon.

This is a Digital only release.  iTunes link below.