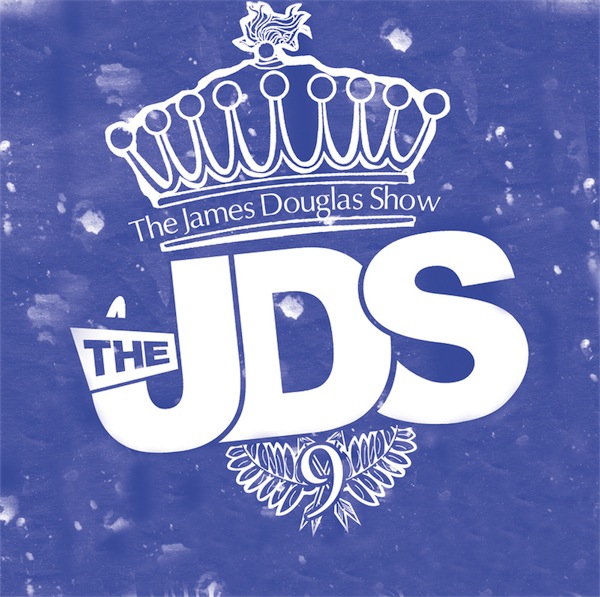 Want to put some soul in your rock n' roll? Some spunk in your funk? A little pop in your hip-hop? A bit of downtown in your James Brown? Well, look no further than The James Douglas Show ("The JDS").

The JDS is an ostentatiously dressed, over the top, perennial show opener and stopper of an act that, according to its own hype, had a Vegas music manager comment upon seeing them, "the circus has come to town."  The band has opened for a myriad of headliners.  Led by vocalist James Douglas, the band consists of Zach "White Chocolate" Fowler on bass; Delmone "Chef" Taylor on sax and keys; Jesse "Shotzilla" Martinez on lead guitar;  Mike "Mike Cee" Carpenter on keyboards; and Marco "Chollo" Nunez on drums.  Fowler, Taylor and Carpenter also lend their voices to the mix.

The band's most recent effort is a nine track CD titled 9.  The nine tracks (ergo, the album title 9) are over the top, funked up, mowed down Motown, black and blue boogaloo that will have you doing a line dance until you think you are the reincarnation of Don Cornelius.  On its website (http://www.thejamesdouglasshow.com) The JDS band members provide oral commentary on virtually every track on this release so I won't bore you with reiteration of what they have to say.  I suggest, after you get your groove on with tunes like "Wonderfully," "Shake It Loose" and "Can't Stop," and have pushed repeat half a dozen times, you'll want to check out where the musicians that created the music got their inspiration and what they think about it.  Then, you can take off your dancing shoes and rhinestone black glove, reposition your fedora and web surf over to their site for a bit of insight before you again fist pump your way across the room doing the Funky Chicken.

Where does a band with such a talent for funk and soul rock n’ roll originate? Detroit? Chicago? New York? Los Angeles? Nope.  They're from Albuquerque, New Mexico. Let that sink in.  Albuquerque is not exactly the hub of modern funk and soul culture.  You are more likely to hear Brad Paisley than Parliament Funkadelic in the Old Town Square.  A pimped out ride in Albuquerque means dual shotgun racks, not a gold Cadillac on a donk set of 24 inchers.  Yet, that is where The JDS formed in 2003 and first found its audience.  Since then the band has been on one western U.S. tour after another, has released a couple of CD’s, and has played at all the music and entertainment industry shows and gatherings.  They are the choice of music industry insiders for a party down good time.

So, are you ready for an old school dance party?  If so, add a little glide to your Slide, get chunky with your Monkey, go go your Mashed Potato, start jumping with your krumping, romance with your slow dance and hop aboard rock n’ roll soul train number 9 with The James Douglas Show.