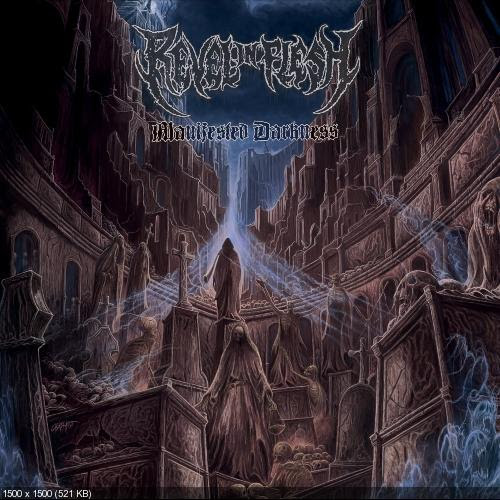 Revel is one of my favorite words in the English language.  When you revel in something, you absolutely get into it and enjoy it.  Do you own a dog?  Has he ever come home smelling like he spent a week living in a Cannibal Corpse album cover?  That's because he went out and found some dead thing in the woods, and he reveled in it.  Have you ever been in the mood to celebrate something, and then woke up the next morning with a midget, 3 ducks, a hangover and an empty case of Astro Glide?  No, that was just me?  Well, I reveled in it.  And reveling in flesh?  Don't get me started or this review will never go anywhere.

“Manifested Darkness” is the newest release from these German death metallers.  They have the Swedish death thing down pat.  This is their second release and it is a good one.  It kicks off in grand style with “Revel In Flesh”, just raging and blasting away.  Their singer doesn't sound like Gollum, he sounds like he has Gollum stuck in his throat.  “Dominate The Rotten” starts out sounding like it might just ease off the throttle a bit, but no, it just rips your face off.

Then “Deathmarch” comes along and at least slows the tempo down a bit so you get a chance to breathe.  The brutality level is still right up there, though.  Title track “Manifested Darkness” is next.  It starts with some black metal-ish tremolo picking and then ramps up into a nice groove reminiscent of Amon Amarth.  “Tormented In Fire” is up next.  It begins with the sounds of I don't know what, and I don't want to know what that is making those sounds.  Like maybe one of Asmodeus' more nasty playthings got loose and is looking to have fun.  And by fun, I mean ripping you limb from limb.  And the song itself is pretty blasting and brutal too.

“The Maggot Colony” comes next and keeps the death metal cranking, along with providing a good visual.  “Operation Citadel” follows on and is the longest track on the release.  It's more of a mid tempo monster and gives everything a chance to throttle down before the final triumvirate of “Warmaster”, “Rotting In The Void”, (again, great visual), and album closer “Twisted Mass Of Burnt Decay”, which is just an absolute rager to end things on.

I am really impressed that a band can come out in a style, like Swedish death, that has been around for what, 20 years now, and still knock one out of the park like this.  This is a very solid release from a band that definitely knows what they are doing.  It's going to crush you and rape and pillage your earholes, and you will enjoy it so much that you'll listen over and over again.  The musicianship is superb, the production is good, the songs are well written.  Everything about this release screams to you to pay attention to it.  And yeah, there's the last 500 words I've written trying to convince you to do the same thing.  Go buy the damn album already.