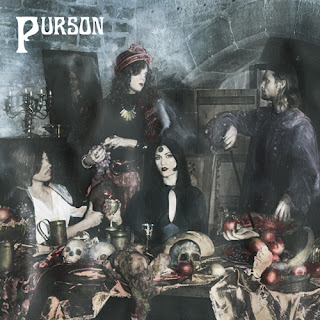 or, the most accurate and least-though-still-quite-a-bit-reductive, analogy:

Clannad, doing a covers album of Black Sabbath tunes they heard on an unofficial bootleg cassette that they couldn't quite hear but really loved overall-type act:

It's a testament to how good this record, The Circle and the Blue Door, is: these guys are English theater geeks, and English (Not Michael Cane's Jack Carter but Richard E. Grant in anything) on top of that (whom you'd probably yearn to assault were they on the street)-- and yet... this record is well beyond great.

"The Tempest and the Tide," "Spiderwood Farm," and "Sapphire Ward" are among the best tracks of 2013, though the others are quite cool as well....

Riffs! (Surprisingly!) Riffs like... The Circle and the Blue Door is, in an alternate universe very similar to our own, the Sega video game score highlights to a particularly sinister Disney cartoon villain, one from a Mickey Mouse Castle of Illusion or something similarly-animated-and-questy-yet- sinister, written by Anton LeVey with Charles Manson giving notes about commercial accessibility....