Pagan Altar and the 30 year journey to America

Our dedicated scribe, Rys, had a personal inside journey with Pagan Altar as they came to America for their first time ever.

“Some people complain because it takes then them six hours to get to Baltimore.  It's taken us 30 years! But we're 'ere! Let's have a little bit of reverence....”

Saturday
Things did not start off well for Pagan Altar's maiden voyage to the US.  Friday morning, the boys got stuck on the highway en route to Heathrow because of a huge accident, thereby missing their flight to the US by about a half hour.  Then, in a completely unrelated incident, a British Airways flight caught fire as it was taking off.  No one was hurt but the runways were closed for a few hours, which resulted in flights being delayed or canceled.  This in turn effected the band when trying to find a hotel close to the airport so they'd be on time for their newly booked flights Saturday morning.  Guitarist Vince Hempstead, who had been logging the bands misfortunes on Facebook, was so frustrated he posted, “It gets worse. Not only missed the flight to Baltimore due to a 4 hour traffic jam all hotels are fully booked and we have nowhere to sleep.”  True to the spirit of metal brotherhood, fans local to the area blitzed the bands in-boxes with links to hotels close to the airports, and various travel sites, and a few hours later Vince happily posted that they had found a room for the night.
As of Saturday am. Vince “checked in” from Heathrow and said the band were waiting to board their plane.  Then the inevitable bad luck happened late Saturday ngith when the band got to their hotel in Baltimore and posted this to Facebook, “After 14 hours arrived in Baltimore and our hotel has been overbooked. When's it gonna end.”  Frustrated, the band went down to the Fest to check out the band Down and knock back a few beers to forget their troubles.  They were fortunate enough to find a few empty rooms at a hotel just two blocks away from the fest. 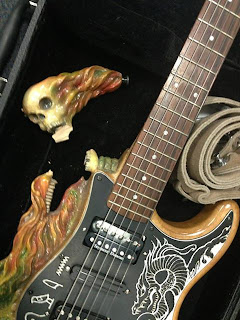 Sunday
Vince checked in on facebook saying the airline wrecked the neck of his guitar.  He spent the morning looking for an  open hardware store and manages to glue the neck back together in time for the gig.

My buddy Blaise Daly (not his real name) and I headed out of Brooklyn a little after noon.  I was a nervous wreck, constantly doing the math in my head and wondering if we were going to get there in time for Pagan Altar's 5 p.m. slot.  I had read horror stories on the net about the ridiculous lines to get in and the hard ass security going through people's shit.  I figured add an extra hour onto our ETA for that and finding a parking garage with vacancies!!
I needn't have worried.  Even with multiple stops for caffeine and the call of nature (which I suppose go hand-in hand), according to the text I sent PA's drummer Dean Alexander, we were on the queue to get in by 3:46.  He told me the band were coming to get us so we shouldn't have any trouble getting in.
The line went very smoothly, even the intense search of my messenger bag wasn't stressful at all – maybe the feminine  hygiene products I was carrying helped curtail the search (“She's on the rag – I'm not messing with her...” the guard could have been thinking.
Still no sign of the band, so Blaise and I went up to the metal table that had “Will call” “buy tickets” or “Guest list” lines and approached the girl working the Guest List line.  “Hi, we're on Pagan Altar's list.”  I chirped happily.
The girl went through her papers and her face was blank.  “I'm sorry, which band did you say?”
“Pagan Altar?” I repeated, a little less cheerfully.
Again, I was met with a blank stare.  “They're playing...today,” I explained, “On the 2nd Stage, in about an hour...???”
“I'm sorry,” the girl sighed, “Um...I have to ask someone, do you mind waiting?”
“How about if I call one of the band members to come get us?” I asked, trying to sound like I thought who the hell I was.
The girl smiled, “or that,” 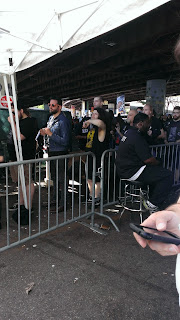 Then followed a series of comical bad timing.  Blaise disappeared to join the endless line that was the wait for the the porto-potty.  I called Dean (which probably cost about $3) to tell him we couldn't get in. He was very apologetic and said they had come down to get us, didn't see us, and had to go back to the stage to do a soundcheck and would come back for us in about 20 minutes.  After I hung up with him, I looked up and there's singer Terry Jones's silver head of hair about twenty feet away from where I'm standing, heading away.  I started jumping up and down, flailing my arms like a fool and yelling “TERRY!!  TERRY!” Of course, there was a band playing at full volume not far away, and I later found out Terry's hearing is not  the greatest as it is so of course he didn't see me.
Blaise came  back and I explained our situation and we watched the crowd happily walking inside the festival grounds.
Then a blonde woman with a “band” laminate around her neck and a puzzled look on her face appeared next to me.  Something clicked in my brain and I turned to her, “Excuse me, are you Terry Jones's wife?” oh the magic of Facebook photos.
The puzzled look turned into one of relief, “RYS?” She smiled.  Within seconds Blaise and I had wristbands on and were following Mrs. Jones – Lynn – to the stage where Pagan Altar were sound checking.
During the sound check, I walked into the photo pit and snapped some shots.  I didn't want to have to fumble for my phone during the set, and I didn't want to be “that person” holding a camera up while everyone behind them was trying to enjoy the show.  I started talking to some of the people in the front row and they were all just as amped as I was to see the bands first ever American gig.
I took my photos then got out of the way for fear security would realize I didn't have a photo pass, or even a halfway decent camera! I found a spot on the side of the stage so I would get the on-stage sound – which isn't always the best but at least I had a clear viewing spot and no worries about the people behind me spilling their beer on my head! 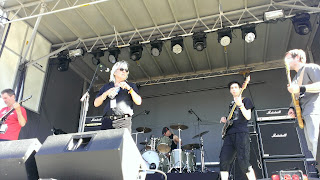 Very nice, glad they made it safely (through hell and back no less) in the end.