Orange Goblin - A Eulogy For The Fans 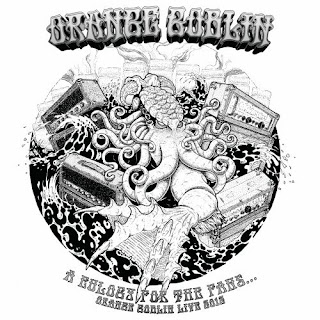 Thousands of people flocked to Walton on Trent in Derbyshire.  It was a lovely March day and the crowd politely massed in front of an elevated platform sandwiched between two large television monitors.  Around three o’ clock in the afternoon a man garbed in black stepped out onto the platform and began to speak into a wireless microphone.

“Thank you all for coming.  My name is Penfold, but I’m better known around these parts as Father Penfold.  I have been asked to speak to you all on behalf of the members of Orange Goblin.  Today, as you well know, marks the six month anniversary of their infamous performance during the Bloodstock Open Air festival.  On that fateful August day, on this very field, the heavy metal community lost fans.  Thousands of fans.  Men, women, and children.  All of them loved heavy metal.  Many were veteran concert-goers.  None of them could have anticipated the spectacle they would witness.  None of them could have possibly known that their lives were about to undergo such a dramatic shift.”

“After Orange Goblin’s set, anyone within hearing distance of the festival’s speaker towers lost the desire to listen to heavy metal music.  They felt they had reached the apex of their metal listening and experimenting with any other group’s music, or even more tunes from Orange Goblin themselves, would only serve to tarnish their memories of that shining metal moment they had just witnessed.  My friends, I’m here to tell you that I understand.  I know the decision to turn away from heavy metal, whether it was yours or one of your family members, was incredibly difficult.  Unfathomable even.  But there is a light at the end of the tunnel.”

“This is not a eulogy.  My friends, I look out on your faces and I see strength.  I see determination.  I see people who will enjoy heavy metal once again!  That is what Orange Goblin wants for you more than anything else.  Yes, that’s right.  They sent me here today to help guide each and every one of you back into heavy metal’s loving embrace and I won’t leave until my task is complete.  If you look behind me you will find two hundred listening stations.  Each station has a pair of headphones.  Playing through those headphones is a recording of Orange Goblin’s Bloodstock performance.  Yes that’s right, the same performance that created your current state.  Fear not.  Listening to one song is all it will take to cure your metal malaise.  Now friends, come forward and be healed!”

Greetings waveriders.  I hope you’re ready to rock and roll.  You are ready, yes?  That’s good, because I’m about to tell you about a superb new live album from Orange Goblin.  It’s entitled A Eulogy For The Fans, and it is oh so very nice provided you are a fan of heavy metal music.  Taking that sentiment one step further this live document contains no material which is suitable for meditation or yoga, and I would strongly recommend against playing it inside a church or library.  You’ve been warned.

Here’s a brief rundown for those unfamiliar with Orange Goblin.  The band is made up of four talented individuals and they hail from the United Kingdom.  They originally formed in 1995 and over the course of their existence have released seven studio albums and five EPs.  A Eulogy For The Fans is their latest and greatest, following in the footsteps of A Eulogy For The Damned (an album which narrowly missed making it onto my top ten list for 2012).  OG play straight up, balls to the wall, riff-tastic heavy metal, and they play it well.  If you are a fan of hard rock / heavy metal that dates back to the 1970’s then listening to this band will make you exceedingly happy.


Why is this live album noteworthy?  Let me count the ways.  First of all, when the band begins their performance there is absolutely no let up until the last song is finished.  Individual tracks such as “The Fog” and “They Come Back” might feature slower tempos, but they lack nothing in the ferocity department.  Second, unlike some other live albums I’ve heard, this one definitely retains its ‘live’ feel.  The sound is slightly imbalanced with a heavier bass presence than the studio recordings and imperfections have not been edited out.  I don’t mean to imply that OG is anything less than a finely-tuned rock machine, but as anyone who has ever attended a rock concert knows guitarists’ fingers slip from time to time.  Singers miss notes.  These things happen.  The fact that OG chose not to cover up these minor errors makes their live record more endearing.  Third, not only does the package include a CD of the entire show but it also comes with a DVD sporting two whole concerts (the Bloodstock show AND their Hellfest appearance), promotional videos, a making of documentary for “Red Tide Rising”, a short film and more.  When I last checked Amazon you can obtain all of this content for less than $10.  That is ridiculous!

So, let me sum up.  Do you like old school, 1970’s heavy metal music?  Of course you do!  Would you like to find out why so many heavy music fans love Orange Goblin?  A Eulogy For The Fans is a great place to start!  Are you by any chance an Orange Goblin fan who could not attend one of their concerts in 2012?  Pick up a copy and make believe that you did!  Speaking for myself, I’ll be rocking out to this one for some time.