Marillion from a Swedebeast's point of view, part 2: Marillion - Script For A Jester's Tear 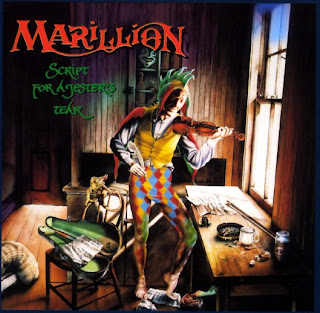 At the time of it's release I had yet to have heard of Marillion and subsequently their first full length album, Script For A Jester's Tear, so that was another of their releases where I had to back track. But I didn't mind because the moment I listened to it everything I had heard of Marillion prior made so much sense all of a sudden. It's a great album, no let me correct myself, a fantastic album in any sense of the word. The band only put 6 songs on Script For A Jester's Tear but that was part and parcel of their type of music, call it New Wave Of British Prog if you will - thanks Darin. Marillion, along with Twelfth Night, Pallas, Pendragon, IQ and Solstice spearheaded this genre but they were all overshadowed by that other British phenomenon called New Wave Of British Heavy Metal. Still, if I am not mistaken, all bands with the exception of Twelfth Night are still active without really going hiatus which is more than most of the NWOBHM bands can claim. Well Twelfth Night make reunion gigs now and then but they are not back permanently as far as I know.

Following the success of Market Square Heroes EMI, Marillion's label for many years, wanted the band back in the studio as soon as possible but having toured extentively for quite some time the band didn't really have any material ready. Shacked up in a flat in Fulham to build on their momentum and write the debut, the recording taking place in SoHo but as it turned out a good chunk of Script For A Jester's Tear was actually written in the studio. But who can tell because this is Marillion's best albums in my eyes.

Even before I listened to Script For A Jester's Tear the band had me hooked. The amazing gate-fold sleeve, courtesy of the fantastic artist Mark Wilkinson, tells the story behind each song which all connect to the Jester who is in centre stage...and who is also the album's main character . Of course it took me a while to break the entire code but nonetheless Marillion had me reeled in there and then. Remember though I had to back track this album and I had heard some of their newer releases and therefore knew what they sounded like. Still, Script For A Jester's Tear caught me off guard, surprised me and absolutely floored me.
Starting off with the title track it quickly becomes apparent that this is not a happy album at all. Darkness is there in abundance in the art work but with the music and lyrics added, we're in for a rollercoaster ride through emotions and anger. So here I am once more in the playground of the broken hearts...the opening line says it all. Not only about the storyline of this particular song, it also represent the recurring theme throughout the album. With Fish talk-singing at first Mark Kelly's solitary piano backs him up until the entire band joins in with a bang. Fish's already desperate voice takes on an even more eerie tone where Pete Trewavas' bass and Mick Pointer's drums are the heartbeat of the jester - who could be you or me - , Mark Kelly's keyboards portraits all aspects of his emotional turmoil while guitarist Steve Rothery covers all spectras. Rothery's explosive solo about 4 minutes in escalates the song even more and also show what a phenomenal but still underrated six-stringer. An amazing song.
The acid trip that He Knows, You Know is, is creepy, claustrophobic yet alarmingly good. It's pretty much in your face about a bad trip being stuck in a bathroom trying to come down. Lyrically it is frightening and almost sick and the music enhances everything the character is going through.
The Web ends side A in a contemplative manner where the Jester scrutinizes his own life after coming down and the time has come to make decisions
the changes have to be made.

Side B kicks off with a political commentary from Marillion in the utterly satiric and funny Garden Party. Poking their fingers at the ultra conservative Cambridge University alumni but it's also a political commentary in general. It didn't go down well in certain quarters but to me it's a great song any way you look at it. In Chelsea Monday the Jester takes on the shape of a young woman aspiring for a movie career that goes nowhere. Instead of hitting stardom she hits the bottom and succumbs to it. It's an eerie, cold and sad song yet extremely beautiful which to me is THE trademark of the band to this day. The album ends with one of my all time favourite Marillion ever, Forgotten Sons. Written about Fish's cousin getting injured in riots in Northern Ireland and also how governments manipulate their people with no qualms whatsoever just to get with they want. It's a biting and angry commentary that is extremely current today. Even though this song was written back in 1983 it tells what's still going on in the world with government after government screwing their people.

Marillion really started to find their way with Script For A Jester's Tear. Not only did it peak at No.7 in the British album charts but the musical quality had also improved immensely. The fairly recent additions of Mark Kelly on keyboards and Pete Trewavas on bass brought the band up to a whole new level. At the same time their already big fan base grew and more critics started to warm to them. However, there were still detractors who accused them of being mere Genesis rip-offs. Again that fell mainly on frontman Fish who wore face-paint and costumes just like Peter Gabriel but that's about it. Of course early Genesis had been one of many musical influences just as Van Der Graaf Generator and Peter Hammill had. The latter two were probably the biggest influence on the band at this point.
It seemed that Marillion was doing fine since, apart from hitting the charts, they were also winning a lot of reader's polls as best band/album. But beneath the surface things weren't good. They thought the album had a weak point...the drums which escalated once the tour commenced. The band members noticed that drummer Mick Pointer played songs wrong or was off-key. Eventually he had to leave which kick started Marillion's revolving door policy for drummers. They almost put Spinal Tap to shame for a while but I am jumping ahead of time.

No matter how I look at it and scrutinze it Script For A Jester's Tear is my favourite Marillion album. Actually I hold each release they did with Fish as top shelf material period but this one outshines them all. Maybe it's because it's their debut, maybe it isn't. Regardless Script For A Jester's Tear is one of a kind and absolutely amazing and I strongly recommend you all to buy it...it belongs in any record collection!

I love this band!! Marillion are the only bad I travelled across the US to see. Looking forward to Swedebeast's thoughts on the "Fugazi" album!