Letter to Jeff - In Memory of Jeff Hanneman 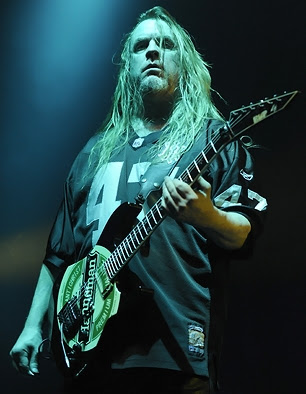 A debt of gratitude needs to go out today. Probably should have gone out yesterday, but this writer had to get his thoughts together, and while these thoughts may not run together in a consistent basis, the sentiment is still there.

May 2, 2013, Jeff Hanneman, guitarist of the legendary band Slayer, passed away. Dude was forty-nine years old.

Not that I was overwhelmed by sadness, for I had never met the man and, therefore, never built a true bond of friendship. But I was struck by a profound sense of loss for what the man, and his stalwart metal mates have meant to me, and in large part, The Ripple Effect and Ripple Music. You see, the story goes something like this:

In 1998, I approached The Big Bald Bastard (coz that’s what we call him these days) about starting a printed ‘zine to review the music in our individual collections. I remember sitting in my tiny apartment with two CD’s on the table in front of me while I described my ideas of the project over the phone. The CD’s in front of me were Bruce Dickinson’s Chemical Wedding and Slayer’s Diabolus In Musica. The power of these two albums, in a time when heavy metal was thought to be dead and gone, was overwhelming and I felt that I had to do something to let the world know that this music was out there! I was inspired to create with my hands, with my mind, with my soul!

Hence the creation of The Ripple Effect.

Some might call the Slayer influence an indirect catalyst to the creation of the Ripple name, however, I think it’s much more direct. Growing up in the 80’s and discovering “Haunting the Chapel”, “Show No Mercy” and “Hell Awaits” at the ripe age of twelve or thirteen years old, and then witnessing the life altering, genre defining metal masterpiece of “Reign In Blood”, and to a lesser degree, “South of Heaven”, Slayer in no small part left an imprint on my DNA. The music formed a shell of resistance from the up turned noses of snobbery society. It was the music that gave me meaning, made me second guess the ideas that were being crammed in my head during my attendance at many a private school. In its own dastardly and sinister way, Slayer’s music is art and it has inspired countless thousands to pick up the guitar, play faster drum beats, scream darker and more Satanic lyrics, and that will never stop. No other fan base etches said band’s name into their flesh.

As I mentioned, I never met the man, but if I had I would have said the same thing I say to any of the musicians that I’ve met along this road of life: Thank you. Thank you for doing what you do, for being who you are, you’ve made an impact on my life and I wouldn’t be who I am if I hadn’t discovered your art.

On behalf of the Ripple Family, Mr. Hanneman . . . Jeff, if I may . . . thank you. The Ripple Effect and Ripple Music wouldn’t be what we are without you.

Postscript. His death may have been caused by complications from a spider bite! - http://www.cnn.com/2013/05/03/showbiz/california-hanneman-spider-bite/index.html?utm_source=feedly&utm_medium=feed&utm_campaign=Feed%3A+rss%2Fcnn_topstories+%28RSS%3A+Top+Stories%29