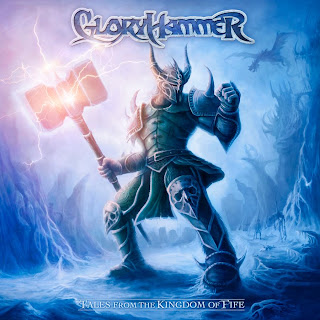 I had the unique pleasure of interviewing keyboardist extraordinaire, Christopher Bowes from GloryHammer and Alestorm fame. His keen insight into the state of Pirate metal, Theatrics, and all things metal in general was eye opening.  We touched on a lot of topics in our brief phone call.

First let me say that Gloryhammer is a very well produced catchy album. What is the percentage of writing that you do versus everyone else in the band?

"Everyone writes. I write about 75% of the music. I let the guitarist make the riffs. I know what a power chord is but that is about it as far as guitar goes. "

So you allow each musician to input what he can.

" It's not an ego driven solo project where I can show off my keyboard skills. The music comes first."

How do you approach a new tour?

"I try to do very little. Try to forget about until the night before the tour starts. Then I just shove a couple of socks and pants into a bag and get on the bus. I've done so many tours it's second nature to me now."

" This band has never toured together before so it's a little more stressful. But at the same time it is exciting. We might do a little more prep work than usual."

GloryHammer has such a catchy power chord driven how to its sound. How do you plan on transferring that style and audio to the stage?

"Really want to take the story from the album and give it a full theatrical production on stage. Crazy lights, sword fights onstage. That sort of thing."

This album captures a kind of knight and sword concept in both visual and sound. You other band, Alestorm, created a pirate metal vibe. Where do you see the next album going in terms of direction?

"Probably the same style for the next album. This one was more medieval fantasy, knights, dragons and wizards. The next album will be set in the distant future, spaceships, aliens and also wizards. We have a concept mapped out for at least seven albums. The story with recurring main characters will travel thru time."

Any plans to play the states?

" We would love to play the states. No reason that it's not gonna happen. Should be doing some festival tours, maybe a UK headlining tour by the end of the year. I want to tour this band a lot."

Any place you have not played but would like to?

" Been to a lot of places around the world. Japan would be cool."
Gloryhammer has a unique power metal sound and their passion for creating a metal vision is apparent in Christopher's responses. He shares his vision of what metal should encompass with the world. Any fans of catchy, power chord driven, metal should check out his band GloryHammer and also Alestorm.