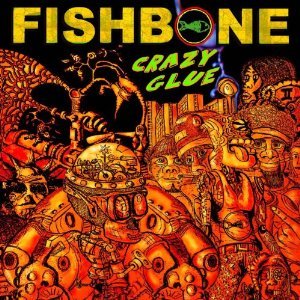 Thanks for joining me waveriders.  I’d like to tell you about an EP that has been rocking my world quite a bit recently.  That EP is the latest release from the band Fishbone, and it is entitled Crazy Glue.  It was released in October, 2001 and my boss Racer X was kind enough to send me a copy back in the early part of 2012.  Before you ask, yes I am aware that we are almost halfway through the year 2013 at the time of this writing.  So what’s my excuse for only informing you all about this musical greatness now, long after it was released and received?  I can’t explain it any better than offering up the fact that I’m a weird guy (those of you who have read any of my previous posts should be well aware of this), and my listening life follows a weird trajectory.  Now…on with the review!

Fishbone, for those unaware, has been around in one form or another since 1979.  Musically the band is a bit of a chameleon.  They play ska.  They play funk.  They play punk.  They play hard rock.  They play soul.  They play music that puts all of these genres and more into a blender and creates something amazing.  To put it mildly Fishbone should forever be classified as an original in the musical sea of soundalikes.  The band released their first EP back in 1985.  Counting the Crazy Glue EP, eleven more releases followed suit leading up to present day.  For someone like me who up till now failed to check into this killer band, that’s a lot of catching up to do.  Fear not however waveriders.  I assure you that I’m up to the task!  I think you will be too once I explain why this EP is so exciting and you hear what this band has to offer.  So let’s get to it.

The EP begins with the pleasantly funky title track “Crazy Glue”.  What is really cool about this song is how it is constructed sonically.  Put on some headphones and you can hear different vocals and instrumentation, especially the horns, come at you from every which way.  I like to think of this studio trickery as the band’s way of mimicking schizophrenia.  Also, the ending of the song devolves into maddening disharmony.  “Flutterbutter” picks up the tempo and has a much harder rock edge.  This track really focuses on its fat, pulsating bassline that drives everything layered on top of it.  “Deep Shit Backstroke” feels like an ever-so-slightly-slowed-up hardcore punk song.  Angelo Moore’s lead vocals positively soar here.  “DUI Friday” is a withering attack upon drunk driving.  “Akkafoo” and “Gittin’ In That Ass” keep the funky/punk/hard rock party going.  I dare you not to bounce around in your seat during the bass/guitar refrains in “Gittin’…”.  They are so energetic that involuntary movement is guaranteed to result.  Finally, EP closer “Weed, Beer, Cigarettes” somewhat mirrors EP opener “Crazy Glue”.  While more aggressive than “Crazy…”, “Weed…” has a much happier overall tonality than the five songs sandwiched in the middle.  That’s not to say that the message being conveyed in “Weed…” is all fun and games, but the socially conscious message is conveyed with a smile thanks in large part to the horn arrangement.

Well waveriders, I rest my case.  Hopefully I convinced you to check out this fantastic EP.  If words won’t do it for you however I’d like to say that I understand.  I know many people need to hear music to be convinced of its inherent goodness.  Heck, I’m one of those people myself!  If you fall into that category I’d like to point you to the two videos attached to this review.  You’re going to like what you hear.  I guarantee it!