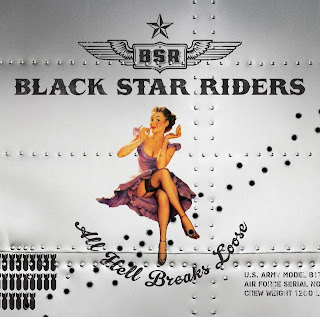 I've lost count on how many times I've had to change my opinion on Thin Lizzy over the years. When I was in high school I would only listen to the kick ass songs on their albums like "Warriors," "Suicide," "Emerald" and so on. I'd complain loudly about the not heavy jams as sounding like "fuckin' Springsteen." (I did the same thing with UFO). That's why Live And Dangerous (and Strangers In The Night) were the ones I liked the most. I made mix tapes from their albums deleting all the songs I didn't like so I could rock out non-stop. Later on when their albums were reissued on CD I started listening to them in their entirety and I realized that the non-heavy rock songs were pretty good! Even better was that they weren't Springsteeny at all! For awhile I wasn't that into the first 3 or 4 albums that much, but then they grew on me, too. Same with the last 2 or 3 albums. Before I knew it I had just about everything and liked it all except for a handful of songs. Not bad for a band with a dozen studio albums.

When it was announced that Thin Lizzy's touring line up was going to start recording new music I wasn't really sure I wanted to hear it. Mainman Phil Lynott's been gone for a long, long time and has achieved full on legendary status. Guitarist Scott Gorham's done a great job of re-establishing the name Thin Lizzy and reminding everyone they deserve a place up there among the very best classic rock bands. Unfortunately, classic rock radio only ever plays "The Boys Are Back In Town" but that's another story. When they decided to not release new music as Thin Lizzy but as Black Star Riders that got my attention. I became much more interested in hearing it, while trying to avoid the new records by Black Sabbath, The Stooges and Black Flag. What really sealed the deal was meeting singer Ricky Warwick and guitarist Damon Johnson for an interview with New Jersey free paper The Aquarian. Not only are they really cool guys but they're the two biggest Thin Lizzy fans I've ever met. Damon saw them in Alabama in 1979 opening for Ted Nugent. One of the few shows they did as a three piece on the Black Rose tour after Gary Moore quit and before Midge Ure filled in. Pretty fuckin cool!

Anyway, All Hell Breaks Loose is a solid hard rock album that will make most Thin Lizzy fans happy. The title track opens the album and picks up where they left off 30 years ago on albums like Thunder & Lightning and Renegade. Heavier than their classic 70's albums but not full on heavy metal. Scott and Damon are a great guitar duo and there are plenty of trademark harmony lines to let you know who wrote the book on this kind of playing. Ricky's vocals are definitely Phil influenced but he's not trying to imitate him. He's from Belfast, which gives him a lot of extra credibility. "Bound For Glory," "Kingdom Of The Lost" and "Bloodshot" have a strong Celtic rock vibe that would have fit in on Black Rose. They even use the same kind of vibraslap percussion effect on "Kissin' the Ground" that was used on "Ballad Of A Hard Man" from 1975's Fighting album. Very cool. But my favorite song is the last one on the album called "Blues Ain't Bad." It has a killer groove like "It's Only Money" or "Johnny The Fox" and some great solos from Damon that remind me of Snowy White's work with Thin Lizzy.

I've done it the hard way. I'm here to tell you that if you're a Thin Lizzy fan, give Black Star Riders a chance.