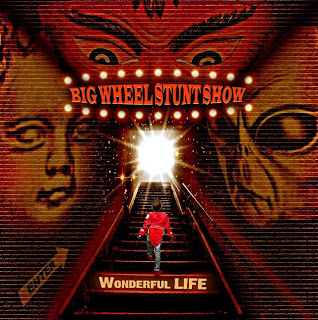 I have been instructed to hide the physical CD and sleeve of Big Wheel Stunt Show's 2012 eleven track album, Wonderful Life, from my oldest daughter. It is not that she loves it so much that I would lose it or that she hates it so much that she would destroy it.  In fact, I'm quite certain she enjoys the music, at least most of it.  The problem is the CD is imprinted with a clown puppet that could be a relative of Chucky and the cover has mutant alien and jester faces above and on the walls of an ascending stairway to the heavens.

My daughter has Coulrophobia.  I've have always thought that odd since she is a costume designer and also works part time at Magowan's Infinite Mirror Maze on San Francisco's Fisherman's Wharf. That's like being an accessory to a carny. You would think that she would embrace the odd make-up and dress, not to mention the silly pratfalls and humor of clown society.  Instead, it scares and horrifies her.

If you put aside the fear of the photos and, though you may find parts of the album unsettling and, at times, haunting, you will be treated to some of the most compelling modern psychedelic electric blues and space rock in recent memory. Big Wheel Stunt Show is a Tacoma, Washington-based power trio comprised of guitarist Evan Nagle, bassist Jake Melius and drummer Justin Gimse.  For the album they added a "Fourth Wheel," keyboardist Andy Basinger.

If you were just to play the first, title track, "Wonderful Life," in all likelihood you would write the band off as a poor folk alternative rock wannabe band.  In truth, the title track sucks as a piece of music, but is perfect prologue to the concept behind the album.  According to the band:

"Wonderful Life tells the story of an ordinary American teenager whose normal, boring life takes a turn for the weird after a paranormal experience."

The only thing I would add after listening to the album is it sounds as if that "ordinary American teenager" was born in 1953. Tracks rely heavily on the transition from the late 1950's rock n' roll of Little Richard and Jerry Lee Lewis to the harder-edged psychedelic electric rock blues and music of Led Zeppelin, Cream, Deep Purple, Robin Trower and the Jefferson Airplane.  Nagle is a hell of a good guitarist and Gimse's stick work puts him in an elite category of musicians.  Melius provides a heavy bottom that bubbles up from all over the electric bass fretboard.  The band's promo puts it this way, and you will get no argument from me:

"From T. Rex to Little Richard, the Who to Sly and the Family Stone, Sabbath to Metallica, Big Wheel Stunt Show is like the culmination of 5 decades of American fused together into an immediate sound that anyone can enjoy."

Check out this "B movie rock opera about a young person whose average existence is spun on its axis."  It is rocking, raucous and great ear candy.  Just hide the cover if you're creeped out by carnival folk.