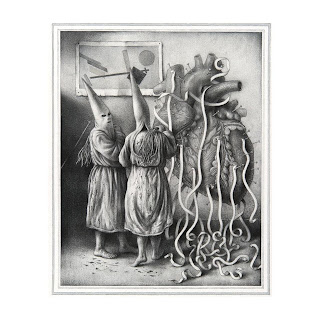 I’ll be the first to admit, I hate those albums that are like one or two songs that last thirty minutes each.  Usually, bands aren’t creative or dynamic enough to pull it off (in my opinion) and it becomes a test of stamina.  “Can you make it through our EPPPIIICCCCC” they scream metaphorically into the atmosphere.  By minute 12, I’m done. I’m all for a long song.  Between the Buried and Me’s runtimes can stretch for a while, and they are one of my favorite bands.

Enter Altaar.    I saw two songs. Tidi Knem Aldri Att (with a run time of 19:59) and Dei Absolutte Krav Og Den Absolutte Nade (14:14) were staring at me, taunting me with their length.  I was just about click the little red X at the top right corner of my screen, when I just got a wild hair and decided to go for it.
What I heard was incredible.

It starts off droning.  It’s very dark and moody, with tuned down guitar and an almost “lazy” pace (not in construction, but the introductory pace).  It hooked me.  For four and a half minutes I listened to the same drone until the guitars cut out and a smooth bass line took over.  From then on it was a tour-de-force of changes, chug, distorted mess, orchestration, and intensity.  It ends on three minutes of creepy sustain and the sound of drums sporadically echoing throughout the darkness.

It’s a piece of music.  This isn’t pop.  This is classical in nature… it’s big, it’s bold, and it’s incredibly satisfying.

Sadly, the second song doesn’t live up to the lofty expectations I’d garnered from the first.  It’s a quality song.  It starts off with the same eerie silence with some harmonic notes lightly touching off.  This awesome mood setting works to get you ready for the heavy onslaught of guitars that kicks off at 4:25.  The first vocals of the entire EP fit well.  Guttural screaming increases the intensity and is present throughout the middle section.

While I like the second song, I loved the first one.  It was harmonic and reminded me of sitting In an orchestra’s performance.  It was spectacular.  The second song fell into a bit of a “been there-done-that” rut.  Still great, but it’s not as breathtaking as the first.

Altaar is a unique listen.  It’s very challenging and won’t be for everyone.  If you have a head for this type of long and broody metal, give it a listen.  It will be worth your time.