A Letter to Trevor - In Memory of Trevor Bolder

When I volunteered to write this little piece I underestimated the difficulty I would have in doing so.  It's never easy when a musician you look up to passes away.  We mourn for the great loss to the  music community, and ultimately we mourn for the loss of a part of ourselves – the music in our lives.  When  Elvis died, thousands of people lined the streets outside Graceland.  They were grieving  for the symbolic death of their extended childhoods as much as for the death of the multimillionaire who was a complete stranger to them.

But that's just it – we don't see these musicians as strangers.  We listen to them on our stereos,  mp3 players, watch their videos on YouTube, see them in concert, and sometimes are lucky enough to get to shake their hands after a show (or in my case give them a peck on the cheek).  We think of musicians as being a part of our lives, as some  sort of extended family.  In the last few years, with the popularity of social networking, we are even privy to the most intimate of details from those that choose to share their lives with us: to their thoughts right after getting offstage, to what they're having for dinner. 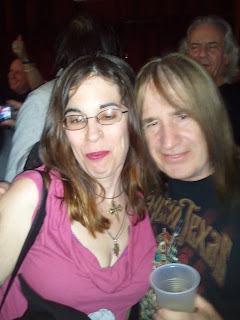 Is that why I'm so upset that bassist Trevor Bolder passed away? I only met the man once,   I was hammered and may have babbled like an idiot (which he dealt with in a very gentlemanly fashion). From what I remember of that encounter, he handed me a pick (even though he was from the old school of finger pickers) and  PROMISED he would be back in NY very soon.  “I won't miss you,” he said, as we stood outside the club on a crowded New York city street, “I'll be back with Heep next year and I'll see you then,”   As I type this, I'm trawling through songs on Spotify from Trevor's varied career, and what are some of my favorite “bass moments”.  Please bear in mind I am not a bass player, I just play one on Facebook.

With David Bowie:
Queen Bitch (From Hunky Dory)
The song starts off with a breathy count off by Bowie, then an acoustic guitar before going into the first verse with Trevor's thunderous Gibson EB-3 laying the foundation down, counteracting the vocal melody.  The song escalates as Mick Ronson's metallic guitar comes blasting through, but Trevor's holding it down, steady, with a few sweet runs thrown in but never losing the groove with drummer Woody Woodmansey.

Moonage Daydream (From the Rise and Fall of Ziggy Stardust and the Spiders from Mars)
The song starts off with a thunderous riff from Ronson, then the chorus is  a bit more mellow but still there's that fat, unmistakable sound of Trevor's melodic bass.  You kind of get the impression he was told what to play, but every once in awhile pulled out a tasty little run as if saying “screw you, I’m showing off my chops” And I don't mean the famous muttonchops he was known for at the time!

Panic in Detroit (From Aladdin Sane)
I've tried to keep it to just 3 Bowie songs, but it wasn't easy.  I had to include this song. I was obsessed with it years ago when they used to play it at a now defunct bar in NYC called the “Continental” in between bands.  There's so much going on in this song, the multilayered vocals, the different types of percussion, but all I hear is Trevor's driving bass

With Uriah Heep
Sympathy (From Firefly).
Picking only 3 Heep songs is proving to be a lot more difficult than 3 Bowie songs, as I much more enjoy this type of music.  Firefly was the first album Trevor recorded with Heep. It was also the band's first with singer John Lawton.  There was a deliberate shift in sound, to me the band is more aggressive.  On this track, keyboardist Ken Hensley plays dueling lead guitars with Mick Box.  But even with the beautiful Thin Lizzy like harmonies, there's Trevor, who by now switched to a Fender P-bass.  There's a lot of “galloping” in this song, and Steve Harris would be lying if he didn't say Trevor was an influence on his playing – even down to the model of bass

Free and Easy (From Innocent Victim)
To this day, when the band play this song live, Mick Box introduces it as “ranked as one of the greatest heavy metal songs” . This song is up here for personal reasons.  At shows the band invites females to come up onstage and “head-bang”.  When I saw them in NY I was unwillingly dragged onstage by a few girls I had just met.  I hid behind Trevor for the entire song, and when it was over, seeing my red faced mortification, he quietly thanked me for coming up onstage.  I never forgot that.

Nail on the Head (From Into the Wild)
I had to include something from the most recent album, and sadly Trevor's last with the band.  This track has been maligned by Heep purists, but it's my favorite on the album.  It's a straight froward AC/DC style 4/4 song but with the trademark Heep harmony vocals and omnipresent keyboards.  Trevor’s bass really kicks in at the first chorus and DOMINATES for the rest of the track.  His playing during the verses is sparse but you know he's there driving the whole track.  During the bridges and guitar solo he lets loose.

Well there it is.  I'm sure people more qualified than I would have a different, more thorough list. I left out the tracks he did with Wishbone Ash, the Cybernauts and the Spiders from Mars because I'm not familiar with them.  I don't know technical terms for what notes he played, what chords he used, I barely know bass guitar makes and models.  But that's my imperfect little tribute to the late Trevor Bolder, the pride of Hull, Northern England.

Posted by The Ripple Effect at 8:58 AM