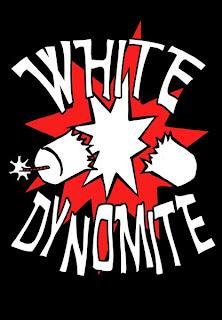 Well, we were just another band out of Boston
On the road to try to make ends meet
Playin' all the bars, sleepin' in our cars
And we practiced right on out in the street
No, we didn't have much money
We barely made enough to survive
But when we got up on stage and got ready to play
People came alive

Having had the pleasure of seeing White Dynomite rage the stage a few times I can say the people really do come alive. Especially the people on stage. Featuring two members of Roadsaw (Tim "TCB" Catz on bass and Craig Riggs on drums) as the rhythm section you know this band can boogie. The guitar playing of John Darga and the unhinged vocal stylings of Dave Unger complete the package. So what do they sound like? They claim eer, fried chicken, polyester, gasoline and horror movies as their influences. There's not much I can add to that except for maybe Foghat and the Lazy Cowgirls. Songs like "Cuz I Said So" and "Go Fast Be Violent" are snotty punk scorchers that will probably piss off uptight punkers. "Don't Tell Me (I Need A Doctor)" boils down Humble Pie's "I Don't Need No Doctor" down from 8 minutes to 2. Any ladies out there interested in the men of White Dynomite just need to listen to "Black Light Woman" for instructions on what they're looking for. But, by far, the best jam on this album is "High When I Die" because it will be totally accurate.

What else could you possibly want from a rock band's first record? The cover's offensive, the music kicks ass and the guys are haggard warriors that kick to the jams onstage. To quote Boston again -

Listen to the record!!!